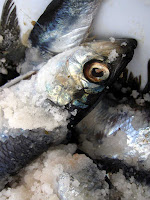 Combining two items which formed a staple of the Scottish crofters diet over many centuries, herring coated in oatmeal is a traditional, tasty, nourishing dish rich in Omega Oils. These two ingredients would have also been staples in Connemara, although I don't think they were used together in this part of the world.
Herring is an under-rated fish, sustainable, healthy commonly available and economical.
Catching them on a small scale can be hard, as net caught is a lot easier than line caught which is very tricky as they feed mostly on plankton throught their lives.

Herring are a wonderful fish, and are a major part of North West European heritage.
Sill is what herring are called in Scandanavian countries. In Russia, pickled herring is called Silodka.
In Holland in particular, herring has always been very important, in some ways Herring built Holland. 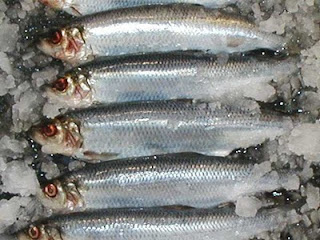 They love small herring served raw with diced fresh onions - and I love it in a white bread roll.
In the seventeenth century, the Dutch herring fisheries in the North Sea were considered the most sophisticated and demanding fishing operations in the world. From the income generated in exporting herring accross Europe the Dutch generated income that went into sailing technology that created their golden age.
In historical terms, herring can perhaps be considered the most important commercial fishery in the world.

The Dutch began to build ships which resulted in Holland becoming a seafaring power.
The trade of herring eventually led to the Dutch empire through exploitation and later colonialization.

Without the money and technological development built on the Herring fisheries, there would have been no Dutch East Indies company, no Java coffee - The Dutch were the first to import coffee on a large scale, and they were among the first to defy the Arab prohibition on the exportation of plants or unroasted seeds when Pieter van den Broecke smuggled seedlings from Mocha, Yemen, into Europe in 1616. The Dutch later grew the crop in Java and Ceylon.

Without this trade there would have been no golden era to generate the money to allow the Duch Masters like Claesz, Vermeer, Rembrant et al to create paintings that we all know and love today, and without that artistic foundation it is doubtful if we would still be enthralled by Van Gough. 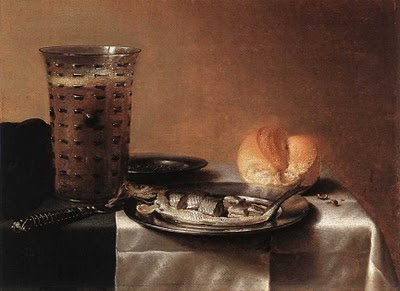 Herring are also one of the more environmentally responsible fish

This quick and easy meal is without doubt one of the simplest and tastiest meals to cook, great with salad and soda bread or new potatos later in the year. If you are lucky enough to have them, mashed jeruselem artichokes are great with this dish 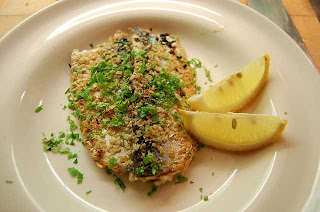 Method:
Cut along the underside of the herring, lay it on a table, cut side down and hit across the backbone in a few places with a rolling pin or your hand.
Remove the backbone and as many of the smaller bones as possible.
Scrape the scales from the fish with a knife, remove heads and tails.

Sprinkle with salt and pepper and either toss them in a plastic bag with plenty of rolled oats or put the fish on a plate and coat them with oatmeal - you may have to press the oats into the fish to ensure it is fully covered.
Put a knob of butter in the pan - cooking oil or dripping also work - put them in with the skin side upwards first.
Fry until lightly brown, turn and cook the other side. It should take 5/7 minutes.
Drain the fish on kitchen paper (paper towels).

I'd suggest serving with lemon and parsley - old Scots would not have known such refinements!