Well, for dinner later today I lifted this years Oca from the tyre pile, and it was a very good yield, good sized tubers which will be roasted later today with the turkey. 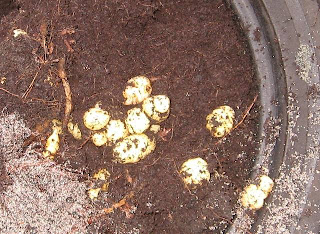 I'll try to get moe pics up later. Quite tired, it was a long trip home.
Also out of the ground today were carrots and parsnips.
Obviously the brussel sprouts were picked today, not a great haul having been neglected - but the plant tops also make a nice addition to the xmass greens, with some hardy kales to bulk it out.

Spuds are Mr Littles Yetholm Gypsys - the colours on the skin make them wonderful for baking.

Posted by irishkitchengarden at 6:29 AM 4 comments:

Bee's buzz out for Freedom - the Greatest escape

Any regular readers of the blog will have probably stumbled on my post about the "Singing masons, building roofs of gold"  (thank you Mr Shakespear)- Bee's !

These wonderous creatures are vital in a healthy environment, polinating our crops and keeping our crops producing. I literally love to hear them in the gardemn, when the hedge starts to buzz, spring is starting.

I also wrote, briefly, about colony colapse syndrome. Part of the colony colapse syndrome in the States has been linked to the haulage of bees from state to state, changing latitudes and extending their season as well as moving them from one unfamiliar place to another.
Bee's know their locality, they navigate to find food, and when they find somewhere good, they perform their famous dance to give others directions.
For them to be moves hundreds, if not thousands, of miles in a season must disorientate them.
As well as that there is the daner of desese, bee's from one region may carry pathogens to another area where the local bee's have no immunity, look what happened to our spiecies with the common cold and small pox in the Americas!
I'm not even considering the effect that GM crops may have on the bees, or plants that they cross pollinate! 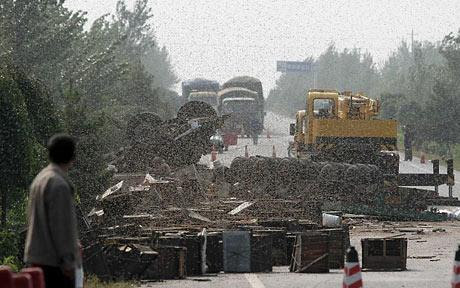 This October a truck hauling millions of bees overturned in southern Utah and authorities were consulting with the Utah Department of Agriculture to determine how to capture or eliminate them !! There were in the region of 25,000,000 bees!!!

What a shower of bastards? Why Eliminate them? Utah has aggressive winters with deep snows.
This seems like a huge waste of money.
I thought it was a joke when they said they were going to try and capture them or kill them. I say, "Fly onto Freedom bees, pollinate any plant you want"!
A tractor-trailer was carrying an estimated 25 million bees when it overturned on the Interstate.
The driver of the semi and a passenger were transported to a local hospital due to injuries caused by the bees, cuts from the crash and 6 - 12 stings each.
In all fairness, if some idiot put me on the back of a truck in my house and then crashed hundreds of miles away, I would not be the happiest puppy in the world. If some pillock overturned a truck I was riding in, I'd be seriously considering injuring them, too!
Another truck in Idaho also crashed this year, the worry was the 'river of honey' would attract bears, the bee's were blamed for this - I dont see how - they never asked to be stuck by the million on the back of a truck and be jack-knifed on the highway?

Anyway, I hope some of them make it and survive in the wild, not to be trucked across a continent.
In their localised state, they have a season to collect pollemn etc. and to rest. Being trucked means they have an artificially long working season.

On a lighter note, I would tell the bees though, they need to improve certain aspects of their species society.
Drones deserve better treatment.
The fact they do no work and have only one thing on their minds is a trait not uncommon in males of other species across the board. Killing them before winter sets in is a little harsh.
Workers need better conditions - bees, unionise, declare a republic for the worker masses.
As for the political bee statement, please bear in mind I have been on Malaria medication since the 15th of last month