A Note on Bee's

To my great joy the bumble bees are enjoying my broad bean flowers.

Later in the year as other vegetables and the hedge fuscia flowers develop, I expect to see a lot more of them and their smaller honey bee cousins.


I have always liked them, and in no way wanted to use a chemical or system that might damage or kill them, it is they who pollinate the flowers and the crops after all - especially important now with reports of bee colonies dying off.

It is for this reason that I have gone to great efforts to ensure whatever pest control measures I use do not adversely affect bees, neither should others as they are the ones who pollinate our crops, we need them.

Bees are entwined in the story of humanity. Despite the fact they can sting us, we regard them affectionately, and they often serve as a symbol for diligence and we admire their social nature.

The Kalahari's San people tell of a bee that carried a mantis across a river.
The exhausted bee left the mantis on a floating flower but planted a seed in the mantis's body before it died.
The seed grew to become the first human.

In Egyptian mythology, bees were born from the tears of Râ, the Sun God, that fell to earth.

The Talmud, Torah, Koran and the Bible all mention the honeybee.

A poster at politicalworld.org, Summerday Sands, gave me a great quote from Shakespeare who described bees as "Singing masons, building roofs of gold"
Vishnu is often symbolized as a blue bee on a lotus flower.
Kama, the east Indian god of love, wields a bow with a string of entwined chain of bees.

In Greek mythology, the nymph Melissa cared for the infant Zeus and hid him his father Cronus. She plundered beehives for honey to feed the infant.
When she was discovered, she was turned into an insect. Zeus took pity on her and turned her into a honeybee so she could make honey for eternity - it is from her we get the word Miel - the french for honey

Honey bees, signify immortality and resurrection, and were royal emblems of the Merovingians, a symbol that was revived by Napoleon as Emperor.

In literature, from ancient to modern times, bees have been used as metaphors by Aristotle, Plato, in Virgil and Seneca by Erasmus, Shakespeare and Tolstoy, as well as by social theorists like Mandeville and Marx.

In a recent issue of 'The Journal of Neuroscience' the Bumble Bee (Bombus terrestris dalmatinus), has claimed the distinction of having the fastest colour vision of all animals.
Apparently experiments have shown that they see five times faster than humans.
The speed with which an animal sees depends on how quickly the light-detecting cells in its eye can capture snapshots of the world and send them to their brain.
Bees were found to evaluate colour much faster than anyone else in the animal kingdom.
Their speedy vision enables them to quickly navigate in dappled light, to recognize shapes, such as the entrance to their hive, and particularly to find nectar-bearing, coloured flowers 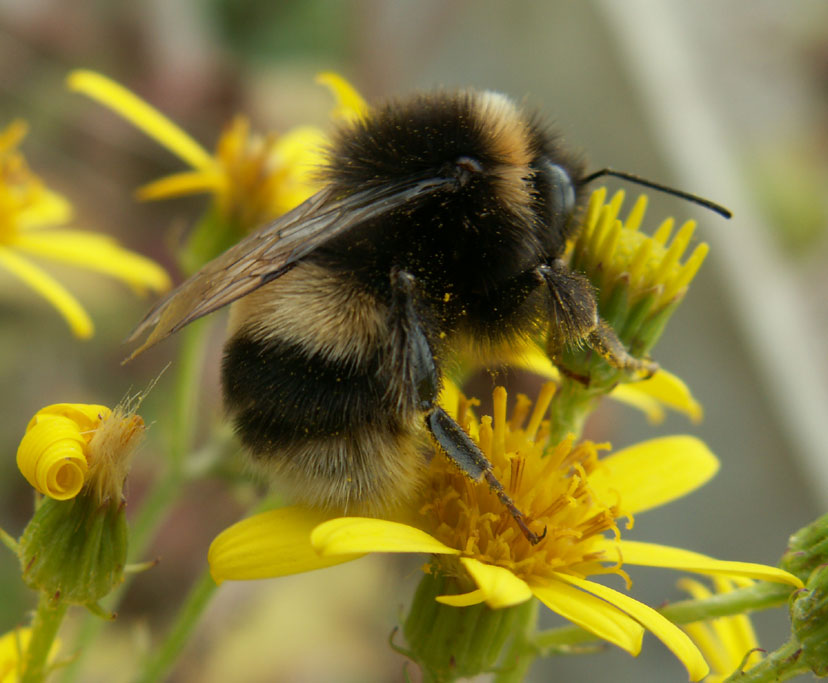 It was once said that bumblebees could not aerodynamically fly, but this was a faulty analogy between bees and fixed-wing aircraft, i.e - their wings are too small relative to their bodies.


But since then we have figured out they're more like helicopter blades - to be precise, reverse-pitch semi rotary helicopter blades, or a moving airfoil, whether it's a helicopter blade or a bee wing generates a lot more lift than a stationary one.
The question with bees is not so much the aerodynamics, but rather the mechanics:

They have to move their wings 200 beats per second to generate lift, which 10 to 20 times the firing rate of their nervous system.

The trick is that the bee's wing muscles don't expand and contract so much as vibrate.

The nerve impulse twangs the muscle, like a piano chord, and vibrates the wing up and down a few times until the next belt of impulse.


However, I have always preferred simply to believe that bees can fly because no-one ever had the heart to tell them they could not.
Each and every one bumbling around my garden is a perfect Terry Prattchet moment, ridiculous, comical but surprising, sublime and very very welcome.

Posted by irishkitchengarden at 3:49 AM

Email ThisBlogThis!Share to TwitterShare to FacebookShare to Pinterest
Labels: Bees