Uploaded from 58 degrees North and 1 degree East - aint technology great!!
A lovely recipe based on one in Dr. Prannie Rhattigans great book The Irish Seaweed Kitchen.
It is a very simple cake, using dried seaweed.
If you don't collect your own seaweed I would recommend an Irish companies products - Spanish Point Sea Veg - you can buy it online.

This recipe is kind of a Madeira cake, and the combination of sugar kelp and caraway works very well.

Dr. Rhattigan uses vanilla extract, I use a bit of lemon zest, other than that the recipe is the same. 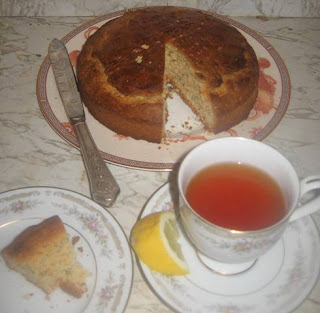 Again, it introduces seaweed into your diet, which is full of minerals, vitamins and iodine.
The only thing you need to do with the dried seaweed is soak it in warm water before chopping.
The sea veg used is sugar kelp or kombu kelp. 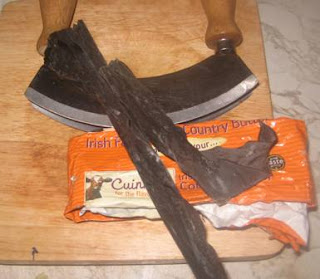 Grease the sides of a 9 inch tin with a little butter and line the base with grease proof paper.

Add the eggs one at a time and beat in well.
If the mixture shows signs of curdling, add a little flour

If the mix is a bit dry you can add a tablespoon or two of milk.

Put the mixture into the tin and bake for 50 minutes
After 50 minutes check the cake with a wooden skewer, you put it through the centre of the cake - it should come out clean and dry. If it does not, give it another 10 minutes in the oven.

It is gorgeous to have with black tea and lemon

Posted by irishkitchengarden at 4:13 AM No comments:

Cabbage and fish are not exactly a combo that spring to mind, but there are a couple of examples that might surprise. Chinese cuisine uses a lot of delicate fish like sea bass, carp or shrimp flavors which are steamed with pak choy. 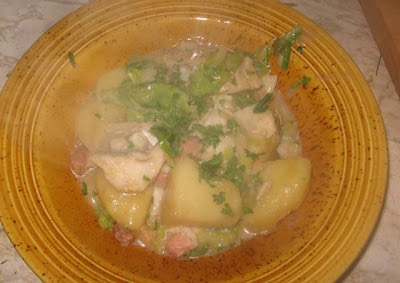 In Ireland we do not have the great food culture of, say, Spain, Italy or France - and because of the emphasis on those we tend to copy or adapt them.
But I have often argued that we have left a lot behind - and if seeking inspiration as to how to prepare what we can produce in an innovative, attractive, simple and delicious way we really need to look North and East.

Because of our climate and our produce - or food stock - I look to Normandy with its dairy, fruits like apples and pears and its meats - pork, beef and lamb.

But where we outstrip them with our massive coastline is in the sheer availability and diversity of fish and seafood. Normandy as the name implies has a Nordic heritage - as do we - the wandering Vikings from Norway and Denmark left their mark in both Ireland and that region of France.

The inspiration for this dish is sort of Norway - New England - Newfoundland where they have a similar food stock to us here in Ireland, and a lot of cod.
Fish Chowder is a staple in the North East of the Americas, why we fill it with smoked fish here in Ireland I don't know, I find it overpowering.
In this recipe as well, I avoid using cream - I use a flour and milk mixture instead which I feel gives a better texture in a stew.

Like us, the further north you get the harder it is to grow crops, so like them we need to look at what is available both on and off the shore.

What is easy for any gardener in Ireland to grow are potatoes and cabbage.

I have developed two dishes using whitefish and cabbage.
The cabbage I used in this dish is one of my favorites - bloemendaalse gele - a very mild Dutch heritage variety, but any mild summer cabbage like Greyhound will do.

This is a very simple and hearty fish stew, a one pot meal which I love because I hate washing dishes
Any firm whitefish will do, I used some locally line caught Ling, purchased from Moycullen Seafoods who have a travelling shop.
That way if I'm not fishing myself I get locally sourced, sustainable and fresh fish.
Ling is very popular in Norway when processed into Lutefisk 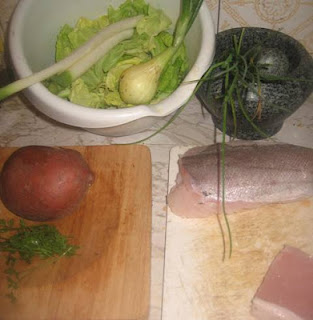 Some diced bacon - I like to use a slice off a joint, but 4 rashers would do
1 onion, sliced
500ml fish or veg stock - ideally any liquid used to cook shellfish, reduced
1 large potato, cut into chunky cubes
About a third of a small cabbage - sliced into ribbons
250 grams pin boned white fish - I used ling, but any meaty firm whitefish like coley, cod, pollock or haddock are good. So are some frozen sustainable types like Alaskan pollock, but I always try to buy local
150ml milk
2 tablespoons chives, chopped
1 tablespoon flour
salt and white pepper to taste - be generous with the pepper with this one, it really adds to the dish - and because of the stock and bacon, go easy on the salt.

METHOD
Fry bacon in a heavy based sauce pan until crisp.
Remove bacon with a slotted spoon and drain on paper towels
Add onion to drippings and sautee until golden
Add the stock and potato, bring to a boil, reduce heat and simmer until potato is tender
In the meantime, mix the milk, chives, flour and seasoning - don't heat it, just whip well. 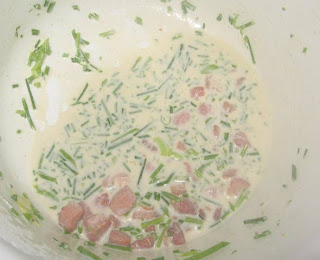 When the potato is just cooked, but still fairly firm, add the cabbage, and simmer 2 minutes.
Add fish and simmer until fish turns opaque.
Add the bacon and milk mixture and simmer 1 minute before serving.

It really is a simple and delicious dish.

Posted by irishkitchengarden at 7:12 AM 3 comments:

This very quick, tasty and nutritious meal is a very good way of introducing seaweed products into a diet.
The flavour is distinctive but not overly strong.
It is very easy, if you can cook an omelet, you can cook this simple but impressive meal. 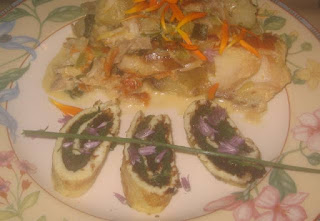 If you don't have access to or want to use nettles you can substitute spinach or chard leaf.

Nori is probably the most well known Japanese seaweed, famously used to wrap sushi rolls.
Nori is made by a shredding and rack-drying process that resembles Japanese paper making.
It is the same seaweed that we would call Sleabhac in Irish  - of which we have a long tradition of eating.
Laver in Wales is the same thing - one of Wales national dishes.

Nori sheets are easily available in most health stores.

Cooking this meal could not be easier. The Japanese have special square omelet plans but you just trim to size from a normal European pan. 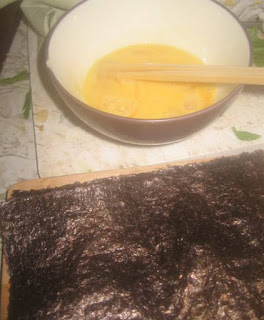 INGREDIENTS
I normally use a mix of perpetual chard leaf, spinach (beet spinach) and nettles - whatever is at hand really, pak choi leaf would be suitable. 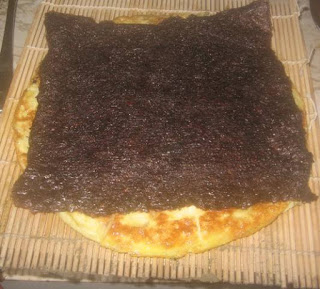 One special item that is very useful for this meal is a sushi mat, very cheap and generally available from most health stores and Asian supermarkets.

Beat the eggs with the milk and fry an omelet as normal.
Lay over a sheet of Nori - no special preparation is needed for the nori sheet - it is super simple. 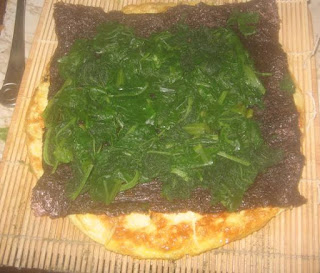 Lay the greens over the sheet and spread - to about the same thickness as your omelet - and trim off excess omelet from around the Nori sheet - this really is a square meal :-)
Then using the rolling / sushi mat or a clean dishcloth roll the omelet.
Slice the roll carefully with a sharp knife and serve as a starter or a side dish.
I love using flowers in cooking so chive flowers are used here.

Using nettles and seaweed, this simple dish is packed with iron, minerals and vitamins, tastes great, uses unusual ingredients and is just plain fun to make.

Sea coriander I find works brilliantly with this recipe - as an ingredient it really compliments nettles,
I also use it in nettle soup

If you are interested in cooking with seaweed I cannot recommend Dr Prannie Rhattigans book - Irish Seaweed Kitchen - which is available online, a great read - not just a great cook book.
If you buy 2 shipping is the same as just one, and it makes a wonderful present.

I hope you try it, enjoy it and share it, if you do like the recipe please let others know about it and the blog -
Comments and critique as always welcome and appreciated please take the time to do so.

Posted by irishkitchengarden at 1:51 PM No comments: