This is a Japanese style breaded and deep fried pork dish.
Like rookworst and endive in Holland, Caldo Verde in Portugal or our own bacon and cabbage the essence of this meal is those good companions, pork and cabbage.

I've added a Japanese staple, quick pickled veg to give it a little more of an oriental feel, and any excuse to incorporate seaweed in a dish is good with me.
Pickles take about 2 hours but are better overnight. 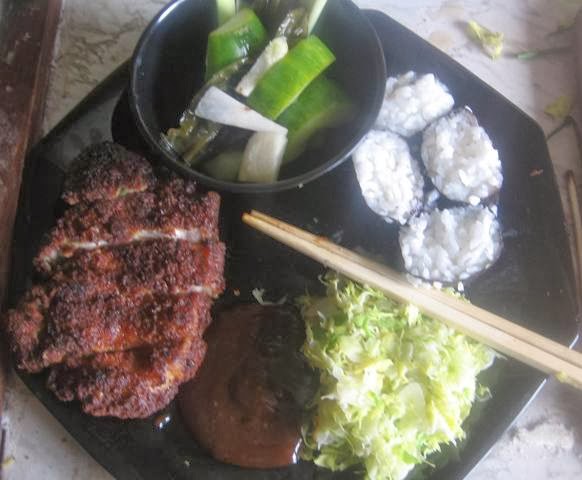 This recipe is based on one I found in Fionas Japanese cookbook blog
Fionas recipe is really good, the main change I did was to incorporate fresh garden herbs and some mustard powder into the egg mix. 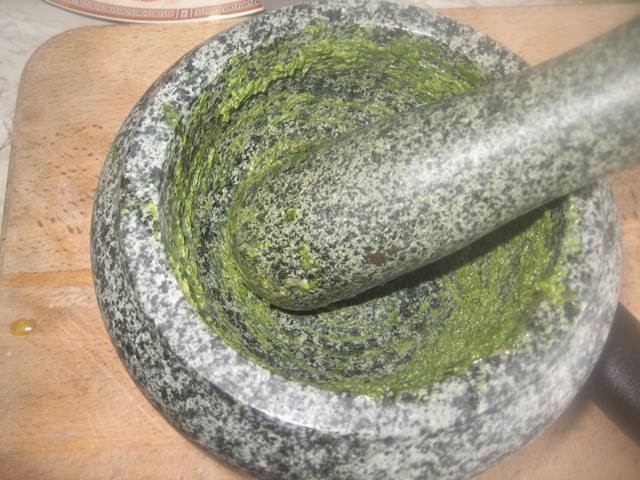 I pureed some parsley, chives, wild garlic leaves with half a teaspoon of mustard powder and beat in an egg. 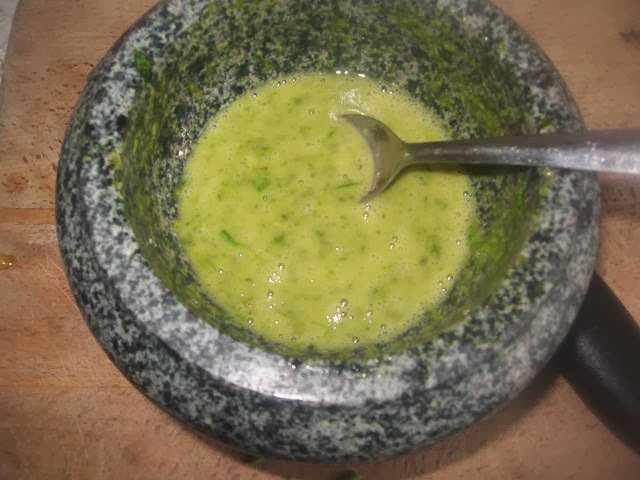 I just did home-made breadcrumbs. Fiona talks about Panko flakes, but being in Connemara at the time, Asian supermarkets are tricky to find - unless your in China town on Craggy Island.
Cut off the crusts, toast and crumble onto a baking tray, stick into a warm oven or under a grill for two minutes - simple as that.

Cook in a heavy based saucepan or cast iron frying pan - the oil should come half way up the chops.
Oil needs to be very hot - sizzling, about 140 C.
Turn and cook until golden brown all over

If serving with chopsticks dond forget to slice up the pork - and it makes for nicer presentation I feel. 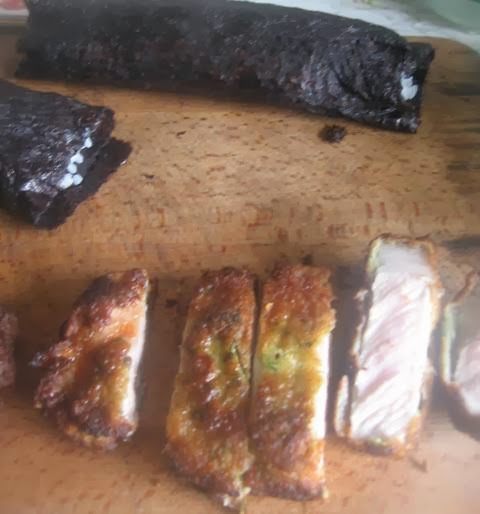 Whisk together mustard and 2 tsp. water in a bowl until smooth. Add ketchup, Worcestershire, and soy sauce, and whisk until smooth.

Sweet and sour cucumber and wakame pickles (kyuuri to wakame no amasuzuke) as a side dish - and the meal is served with Sushi rice and home grown greyhound cabbage. 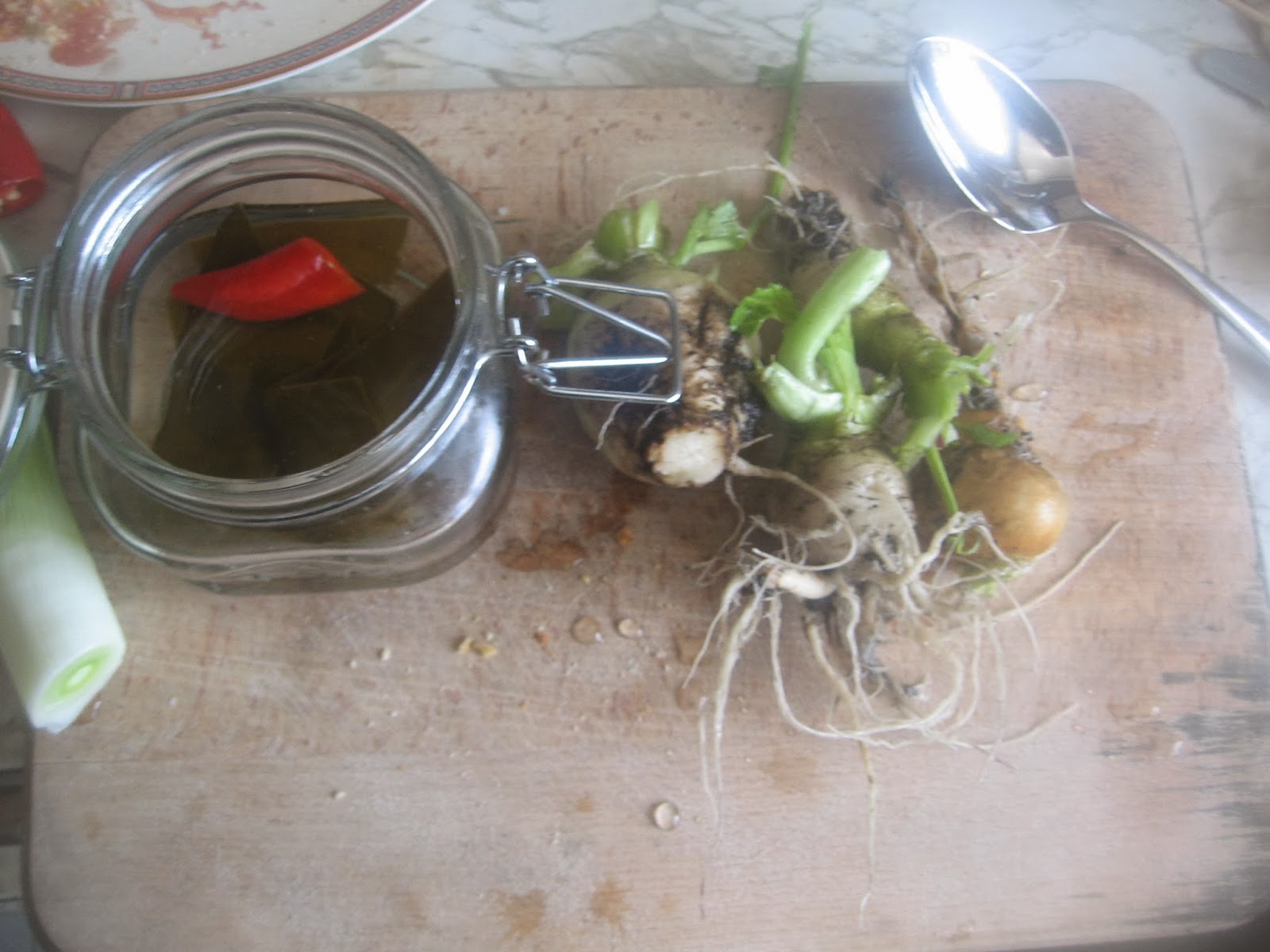 This amount of marinade is enough for one large  cucumber - the long, relatively thin kind that often comes shrink-packed in plastic. If you’re using other gherkins, aim for about 4 to 5 cups cut up.
The marinade:
8 Tbs. rice wine vinegar (not sushi vinegar)
10 cm square piece of kombu seaweed, its a kelp if you are foraging.
1 1/2 Tbs. sugar
1 tsp. sea salt
4 Tbs. boiling water
Half a red chili pepper (optional; leave out if you don’t want any spiciness)
Combine and mix until the sugar is melted.

De-seed and cut up 1  cucumber
Put the marinade in a small glass, ceramic or plastic bowl (not metal) or the good old ziplock plastic bag. I used a fancy French jar!! Moving up in the world. 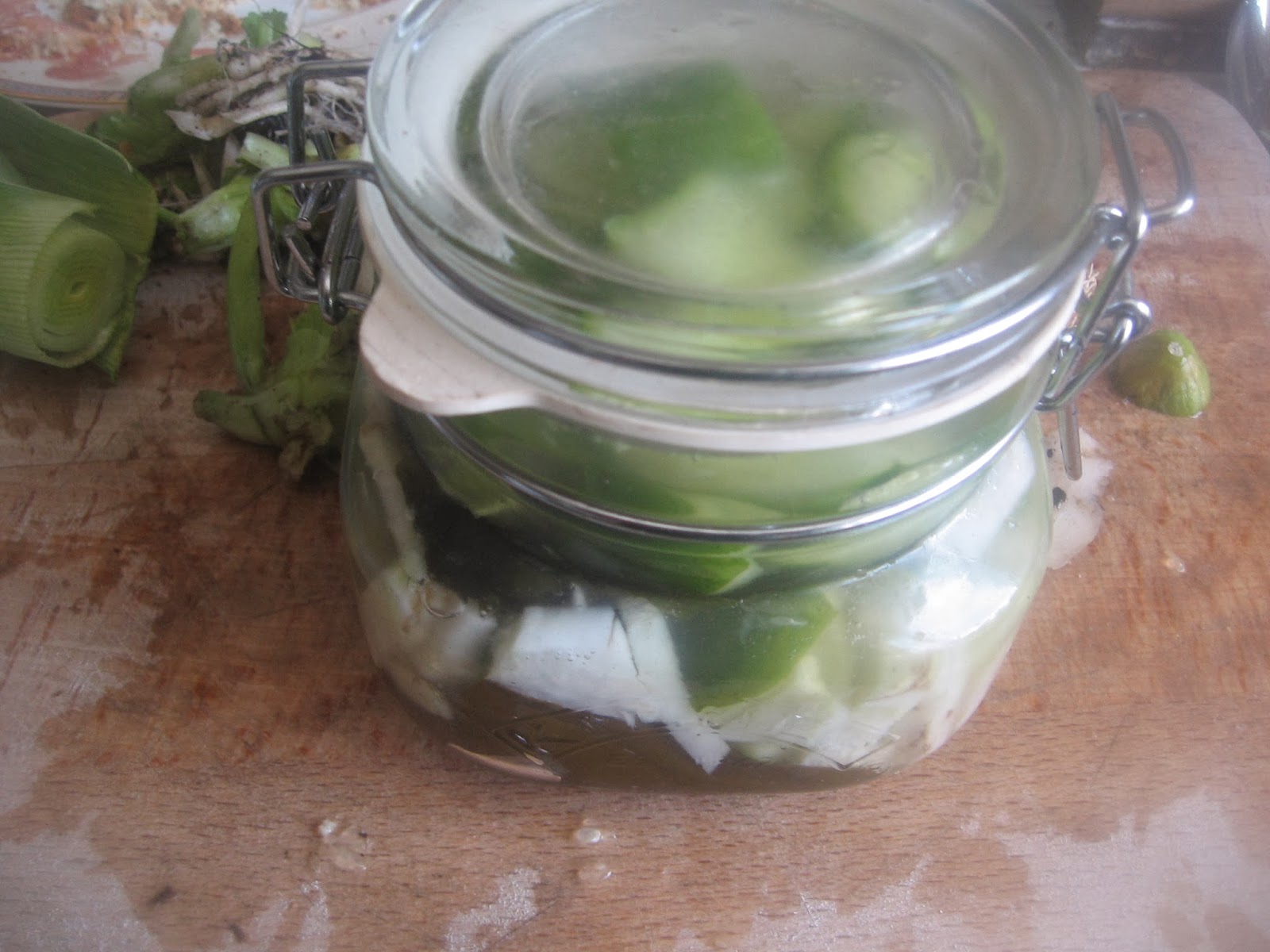 Put the cucumber and wakame seaweed in. Stir or shake around, seal well and let marinade in the refrigerator for 2-3 hours or overnight.

Drain off the marinade and serve in small bowls. This should be eaten within 2-3 days.
You can reuse the marinade once: let it come to a boil, cool off, and put in fresh vegetables.
Besides cucumbers try sliced turnips, carrots, daikon radish, regular radish, etc. 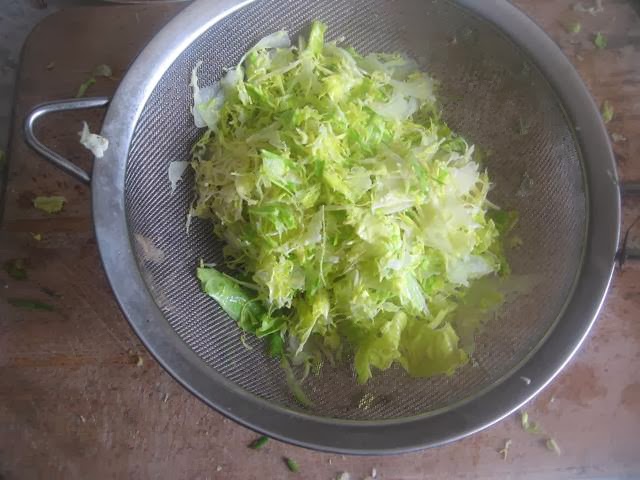 I served the pork and pickles with some regular rice nori and finely shredded greyhound cabbage that worked really well.

Thanks for reading, I hope you try and enjoy this - also works very well with chicken.

Please do take the time to comment, I really do appreciate the time and effort taken - and its nice to know someone is reading these postings

Happy new year to one and all. I do know that I have been updating very little in the last year, but that has been due to moving from Connemara to Cork, and working a great deal at sea.

Good news is I have applied for an allotment in Cork, and will be getting back to growing and cooking.

So, the one thing - which I wrote about a while back, was the use of seaweed in traditional Irish recipies.
Nori are probably the most identifiable Japanese food. Most people associate this delicate looking and delicious seaweed wrapped Japanese treat with the exotic east - and yet it was eaten in Ireland as a staple of the poor for centuries, and the same type of sea veg used to make Nori was eaten in Ireland but known as Sleabhac (pronounced Schlowk).

A very good UK based company producing Nori sheets and a very wide range of dried seaweeds are Clearspring and they are quite widely available in Ireland as well as having an online store. 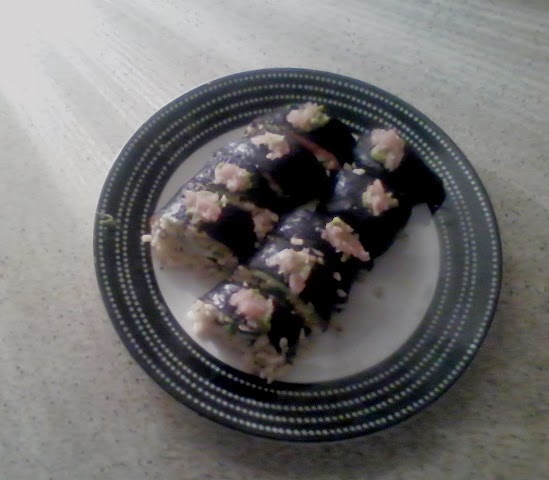 This was covered in previous postings, an Irish version of a Welsh staple - Laver bread - and a Nettle and Nori omelet.

But Nori itself can be made the main attraction. nori sheets, along with sushi rolling mats are easily found in most health stores.
Personally I tend to shop in the English market a lot - the people across the way from Mr Bells in particular. 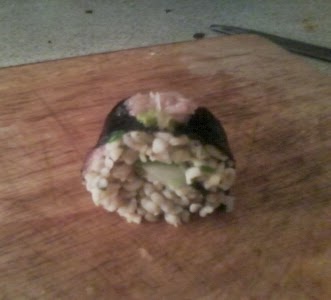 I tried to make a type of Irish bulgar wheat one year, using oats - but that failed and was simply too much work, so I just gave up on that and bought bulgar wheat.
In this recipe, I use it to replace expensive sushi rice, and do a quick Irish nori using Bulgar - which in theory I could grow and make myself here in Ireland.

Prepare the bulgar in to a Tabbouleh - in this case it is an Armenian version called Eech.

Prepare the Bulgar in to a Tabbouleh - in this case it is an Armenian version called Eech.

Put the Bulgar wheat and shallot in a bowl
Add the boiling water and cover
after 15 minutes add the parsley, lemon juice and olive oil to mix through
That's it - Sin E !!!!

Lay the toasted Nori sheets on the sushi mat.
I layered on some smoked salmon slices, then some very thinly sliced cucumber.
After that about a centimeter depth of Eech/Tabbouleh
Baton of cucumber in the center
Roll
Slice
Serve with a little dollop of homemade horseradish sauce.

Think of it - to paraphrase Basil Fauwlty as a Hiberno / Nipponese cucumber sandwich.

Actually, with the fillings it would be Hiberno / Nipponese / Turkish / Armenian hybrid !!!!

I wonder if with reference to my new home would it is a little too much to call it a Cork Norrie recipe??

Although this is my own recipe, if you are interested in cooking with seaweed I still have to say you should invest in Dr. Prannie Rhattigans great book - Irish Seaweed Kitchen

Enjoy - and please feel free to leave a comment - I really do appreciate the time, effort and feedback.

Posted by irishkitchengarden at 11:30 AM No comments: