Frog in the Bog! - Bangers, beans and mash

So its harvest time in Ireland and most recipes I produce should be a celebration of new potato's etc. but with the miserable summer we have had and the low yields I felt this might be quite apt. 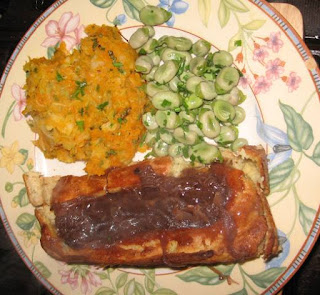 This is a really nice traditional English dish based on one by Marie Rayner - but more about that later.
Toad in the Hole is normally served with mashed spud's and onion gravy.
This is my Irish take on it - Frog in the Bog, or Loscann sa bPortach .

I wanted to do something a little different from the normal mashed spuds. Besides, new potato's are not really suited to mashing.
Colcannon, a mixture of milk, mashed potato and shredded cabbage is about as traditional as Irish food gets.
I have noticed on some UK foodie shows that crushed root veg are becoming very fashionable, so the mash I came up with is sort of a new amalgam.

When the English cook toad in the hole, they tend to use herbed sausage like Cumberland, and if you wish to use them or other herbed bangers that's great.
I just went for my favorite prize winning pork banger from McGeoughs in Oughterard as I use herbs in the buttermilk batter.
I don't know if this would work with vegetarian sausages, if anyone does try please let me know how it went. 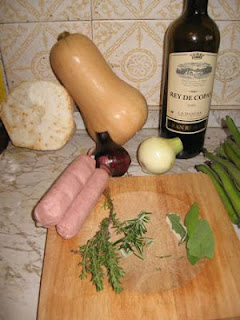 FOR THE COLCANNON ROOT MASH
Don't be afraid to play around with this, try turnips, suede's, carrots, parsnips and other root veg you might be growing or that are in season.

Enough for two people-
Half a celeriac
Half a gourd pumpkin
Half a small head of white or green cabbage, very finely shredded - Blomendaalse Gele or greyhound are ideal.
Good bunch of chives and parsley, finely chopped.
150ml Fresh milk
Knob of a good quality butter like Cuinneog
Salt and White pepper to taste 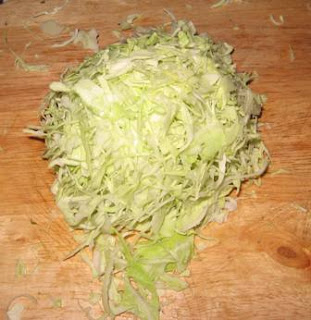 Take your parsley, chives, milk and butter and place in a small saucepan (retain some herbs to garnish)

Bring to a rolling boil, remove from the heat and set aside to infuse.

Peel and dice to about 2" cubes the celeriac and gourd pumpkin.
Place the celeriac in salted boiling water for around 10 minutes, then add the pumpkin.
Cook for another 10 minutes or so until the roots are softening.
Place the finely shredded cabbage in a metal sieve or steamer over the roots for about 5 minutes or until cooked - don't overcook.
Strain the veg well and press excess liquid out of the cabbage - these veg retain more water than spuds and you don't want a soggy mash.

Mix all the veg together and mash with a knob of butter, adding the herbed milk until you get the desired texture.
Season with salt and white pepper to taste 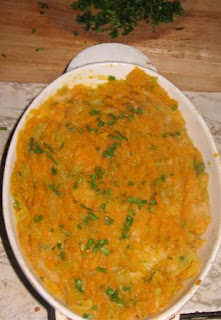 FOR THE FROG IN THE BOG
You can do this while the root veg are cooking. Toad in the Hole is basically herbed sausage cooked in a Yorkshire pudding. I have gone about this in another way, giving the batter a lot more flavour and depth.

I don't at all mind when other bloggers use my recipes or varients on them, but it is unfair when people simply copy and paste without accreditiation. The basic batter recipe this Irish twist developed from is from a great blog - The English Kitchen -run by Canadian Marie Rayner now living in England.

As I have said before, I try to buy as much local produce and support local producers as much as possible, the closer the better.
One of the reasons I started my garden was concern over food miles, and starting the blog was to look at Irish food in a different way - adapting home produce to expand a cuisine repertoire.
McGeoughs in Oughterard, Galway are without doubt one of the best Butchers in the country.
Their puddings and sausages would give any Clonakilty produce a run for its money.
McGeoughs now offer delivery accross the island with their online shop.

So, on with the food.
For the batter you will need:
2 large Eggs
4 oz (125g) Plain Flour
1/2 a teaspoon of baking soda
1/4 Pint (150ml) Cuinneog Buttermilk and a 1/4 Pint (150ml) Cold Water mixed
Salt & Pepper
1/2 teaspoon caraway seeds (optional - but this underused seed is great with pork)
2 or 3 teaspoons of very finely chopped rosemary, sage and thyme. 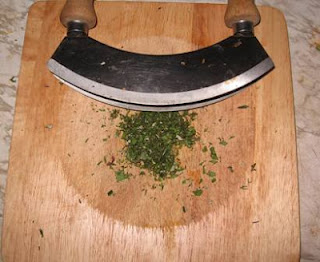 Just a note on chopping herbs, one of the best investments I ever made was a demi-luna, shown above, from Joyces craft shop in Recess, on the road to Clifden from Galway.

As many good quality link sausage as you are going to use, the quantity above is enough for about 6, I just used 3.

Pre-heat the oven to 200C/420F.
Slip the cuinneog butter into a deep sided baking dish or tin with the sausages and place just this in the oven.
Allow the sausages to brown on all sides, just give the baking tin the odd shake Do not prick the skins.

While the bangers are browning off make up your batter.

Crack the eggs into a  mixing bowl and beat well. Add the chopped herbs, caraway seed and the buttermilk - water mixture, whisking it all together really well.

Sift the the flour and baking powder into the bowl and season with a sprinkling of salt & pepper.
Whisk the batter - what you want is a stiff but smooth batter with no lumps.

Once the sausages are browned you can add the batter and herb mix.
You want the cooking dish or tin quite hot with the fat and butter sizzling. 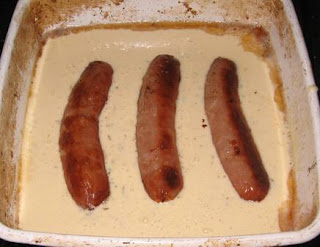 Quickly arrange the Sausages, parallel to each other.
Then pour in the batter mix while the oil is still sizzling.
Place back into the oven and bake for around half an hour until the batter is puffed up, golden brown and crispy. 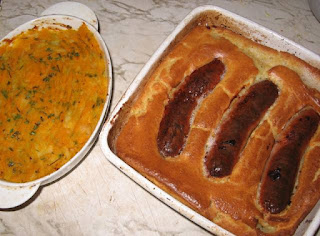 Serve cut into squares with the root colcannon or mashed potato with a gravy of your own choosing.
I did a wine and onion gravy and served with broad beans from the garden.

The gravy was very simple, just 2 medium onions very finely sliced and a clove of garlic, sweated off with a knob of butter and some salt. Once they started to caramelise I added about 100ml red wine and 400 ml water with 3 teaspoons of Bisto gravy granules and left simmering while everything else was being prepped or cooked.

The beans were shelled, I don't bother peeling them. They went into a small pot with about 200 ml of boiling water and a good knob of cuinneog butter for 5 minutes, strained off, another little bit of butter and herbs, tossed and served on the side.

This meal only takes about 45 minutes, handy and very economical.

If you like it or find it of use, please take the time to comment - I really appreciate the feedback received.

Posted by irishkitchengarden at 7:39 AM 2 comments:

Well, its not been the best growing season, a dry spring and a very wet summer - but in the garden hope and growth spring eternal.

Most of us will be lifting crops in the coming 8 - 12 weeks, and its time to start planning the winter crops.

Having worked a kitchen garden you deserve to be able to take fresh, home grown food from the garden all year round.
That brings us onto the topic of winter veg.

Cabbage is named for its cropping season - not for its planting season.
Spring cabbages are usually sown in July and August being planted out in September and October to overwinter and be harvested from late February through to the beginning of June. In windy areas, earth up around the stem and compress the soil with your foot to ensure the plants are stable and don't suffer root rock.
They tend to be conical in shape and quite loose leaved, often referred to as spring greens or collards.

If you sow now spring cabbage should be ready for transplantation to their final spot from Mid-September to the end of October.

They will be about six weeks old, between 2 ½ -3 inches (6-8cm high), and with about 6 leaves. It is recommended you water the ground deeply around the young plants the day before you intend to move them, as this will prevent transplant shock.

Lift out the young cabbage plants from their seedbed with a trowel or hand-fork retaining as much soil around the roots as possible. Pop each transplant into a 4-inch deep hole, each one approx 12-14 inches apart. Allowing 12 inches (30cm) between each of the plant rows.

The 4-inch deep holes will often swallow the plant up to its first leaves, but in the windy Irish climate it will give them deeper roots and they are less susceptible to being leggy or wind damaged.

Transplanting the cabbages encourages formation of a solid head, heart, and establish a sturdy root system. If seedlings are left to grow where the seed is sown, the cabbage heads can be of poor density.
The transplanting process toughens them up, which will help see them through the winter for fresh, early season greens in February, March and April - after harvest obviously, the spring planting season begins.

Another worthwhile crop is Wiener Runder Kohlschwarzer, the German winter cooking radish.
This over winter veg that stands well in the ground can be used like turnip or swede in soups and stews.

Posted by irishkitchengarden at 4:15 AM No comments: