Normal Service will be resumed

Well, have moved from West Galway to West Africa. Will be based in Conakry, Guinea for quite a while, obviously blogging about the garden while being 6000km south of the actual garden ain't going to work - but will see what i can do

Having lived in Holland, there is an influence from Belgian cuisine there. A very useful, easy to care for veg that tastes delicious grown there is chicory, or endive.
The plants greens when sliced finely and mixed through mashed potato while still raw is pretty much their version of champ and give a lovely fresh bite to otherwise plain mash.
It also gives a very nice, slightly bitter garnish to contrast with sweeter veg like carrots or parsnips, and gives a great dash of colour to winter lentils or stews.

Another recipe for use with forced chicons can be seen here for later in the year.

Chicory is probably best known in Ireland as a coffee substitute or blend, roots are roasted and blended with coffee.

My favorite version of endive is the forced winter Chicon. The technique for growing chicon, or blanched endives was apparently accidentally discovered in the 1850s in Belgium when according to one story a few pots with roots were left down a coal mine and grew the famous white chicon.
Another story says that in 1830 Jan Lammers returned from the Belgian War of Independence to his farm near Brussels, where he had stored chicory roots in his cellar while he was away, intending to dry and roast them and use as a coffee substitute.
But his chicory roots, resting for months in the dark, damp environment, had achieved a different result. They had sprouted small white leaves. Curious, he tried the leaves and found them to be tender, moist, and crunchy, with a pleasant, slightly bitter taste. Thus, a new vegetable was discovered — winter endive, or chicon.

Already this year I have had at least three cuts of greens from the plants, and now its time to force them for the witloof, a Belgian variety for which I found the seeds for Witloof from highly recommended Irish based company Gardenplansbypost.com - And they were not all that easy to source.

The main thing that is required is the total lack of light when forcing, otherwise the winter endive will go green and be bitter.

I grew the greens as a catch crop, like spinach or radish, between slower growing plants like leek, parsnip or cabbage.
After the last harvest I lifted the roots. It is said that they should be grown indoors, but with the mild climate we have on the west coast and a bit of insulation they can grow outdoors here. 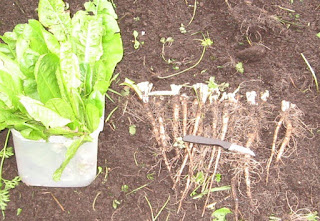 After harvesting the last green leaves the roots are lifted and replanted in a way that light can be excluded. If you only have a few and decide to use only flowerpots, then the drainage holes must be blocked to stop light getting in. 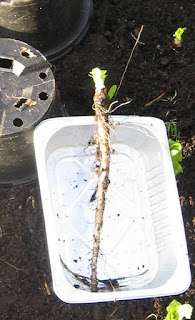 The roots are lifted as gently as possible and re-planted using a dibber or a deep stick, then dropped gently into the hole. 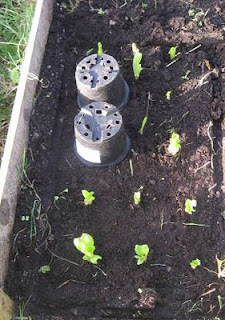 Next thing is, with a clean, sharp knife, the last remaining green chutes are trimmed to the nub, right down to the base. Don't throw them away - use them to garnish any meal.

After that the roots are watered with a general fertilizer, or in my case, a nettle and seaweed tea. Smells not so good but it feeds, and in my opinion, puts off parasites as well.
Add to that a dose of organic slug pellets from the Irish Seed Savers Association. The great advantage of course is that being covered and protected from direct rain means that the pellets only need the one application for the season.
At this point I start covering them with old pots. With winter coming it also makes a good, accidental storage space and with the system I use adds extra protection against light ingress. 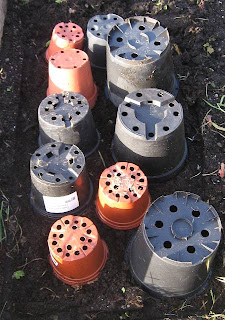 Next thing I do personally, because of the weather here, is over lay a fish box. This helps to further exclude light and will give the chicons extra winter protection against frost, snow, storms and ice. 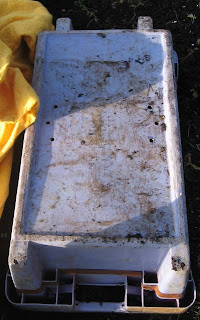 After that to totally exclude light and also to offer a layer of insulation, I use an old blanket. This has its edges pushed into the earth to secure it over the winter, and is weighted down as an extra measure. It also has the added advantage of being a warm perch for Vladimir the cat. 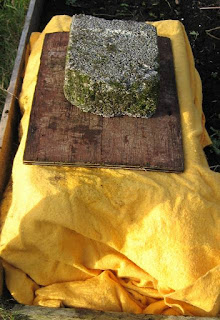 Chicons are a great veg, they can be used in salad or wrapped in ham and served with a cheese sauce. I love the fact that from one seed I get three crops, and with a bit of research I am beginning to wonder how many years I can keep getting winter and summer veg from this versatile and easy to care for plant?

I hope you found this posting of use, and please do take the time to comment or leave feedback - I really appreciate it