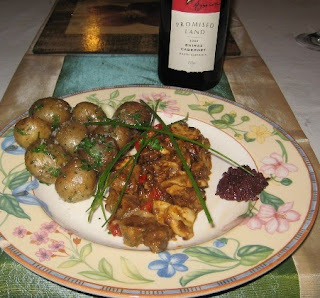 This is a liver dish, but please do not be put off by that. Many kids and even adults have an aversion to it, perhaps because of its texture, colour or presentation at the butchers - but it is the same stuff which the same people will pay a lot of money for in it's processed form - pate.


The other reason may well be that the only liver people in Ireland have had was an over cooked, dried out attempt at liver and onions.


Liver is probably one of the most economic and yet undervalued cuts.
It is filling, versatile and being packed with Iron it is particularly beneficial in the diet of teenage girls who may have some degree of anemia. But this is a way of serving it that most people enjoy.

In keeping with the previous post on onions, I had planned to do a staple - liver and onions - but this is just a little more exotic.

This recipe is basically Hungarian, with a few little alterations from myself, its tasty, filling, attractive and very economical. True to its eastern European origins its heavy on paprika and peppers.
To give it an Irish twist I used a little barley flour and some wild mushrooms - but this is entirely optional.

The wild mushrooms are in a way not only Irish but a nod to eastern Europe - Poland in particular.
This is the time of year that Polish friends of mine tend to become as maudlin as Russians.
With their continental climate, they normally have a long, dry September/October period.

What gets them down is the rain we get here - in particular at this time of year. They call this period of time the Golden Autumn - where it is virtually a national obsession to go into the forests and pick mushrooms.

Other European cultures have a strong interest and knowledge of wild mushrooms, we Irish have a fear of being poisoned - with some justification.
On mainland Europe children are taught how to identify and collect wild mushrooms at an early age.
But we are taught that if it is not a field mushroom then it should be avoided at all costs.

If you want to learn about mushroom hunting in Ireland then its worth contacting Bill O'Dea who has been holds annual mushroom hunts. He also organizes the occasional trip outside Ireland.
For details go to http://www.mushroomstuff.com/
If you don't know your mushrooms, then shop bought ones are a safe option.

Normally served with a veg risotto rice, I just went with some small herbed potato's. 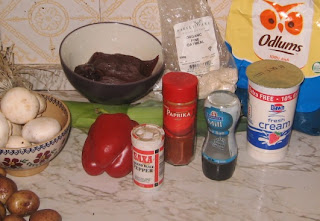 Allow 30 minutes for small spuds, so get them down in some salted water.

Take the flour, Paprika, salt and pepper. Put into a clean plastic bag and mix well.
Add the chopped liver and coat it well with the mix. This is the method I use for coating any meat or veg with seasoned flour. 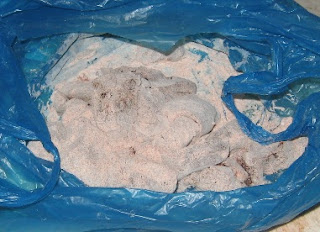 Fry the leeks, garlic and chili gently in some butter until they are soft.
Add the coated liver and cook through. The smaller you cut the liver, the quicker this will be.

To me liver is cooked when the centre of a sample piece is dry and pink, it is important not to over cook it.

When the liver is cooked through add the sliced mushrooms and diced bell pepper, sweat them off until they have softened - about 50% cooked.

Then add the cream, which picks up a lovely colour from the paprika and reduce the heat.
Leave for about 5 - 10 minutes to reduce a little and the bell peppers are cooked. 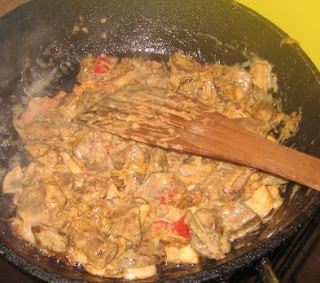 All of the above takes about 20 - 25 minutes, so you are timing it for the potato's.
When they are done, just strain them - put them back in the pot with some butter, freshly chopped herbs and salt. I used Atika parsley, chives and a little dill leaf. Whirling them around in the still warm pot gives a nice even coating. 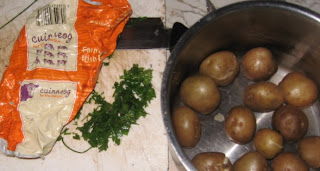 I plated this up with home made Blackberry Chutney, and it really sets off all the flavours of the meal.
The texture of the liver, for those who might find it a little different is well complimented by the mushrooms, so in a way this recipe is all you ever wanted to know about liver but were afraid to ask about.

I found the slight sweetness of Cabernet Sauvignon also complimented the meal. 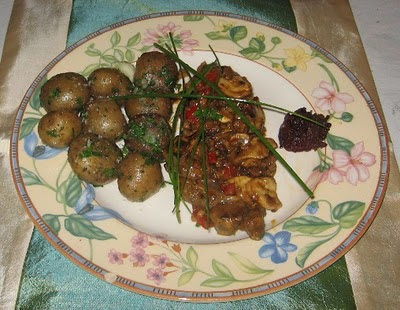 I hope you enjoy this recipe - and please take the time to comment on any thoughts or suggestions.

Posted by irishkitchengarden at 8:25 AM