This is how baked beans really, the original American style.
On occasion, a tin of baked beans is alright, but it cannot be confused with the real McCoy - those are just a facsimile of this American classic. 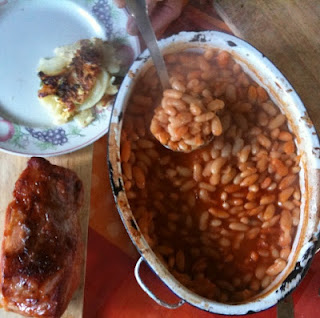 It is very adaptable, chilli can spice it up - chorizo or other dried spicy sausage can be worked in - but this is just a simple, straight forward variant that is great with a dash of Tabasco after serving.

You are using a very economical cut of meat, a few bits and pieces from the cupboard and a jar of beans - hopefully ones you've grown and dried yourself. Most people grow beans as a part of crop rotation in their kitchen gardens.
A dutch oven or heavy casserole pot are ideal for making this dish - it would have been cooked out of a chuck wagon or over a camp fire back in the day.
Potatoes have become the Irish staple in a meal, but the cultivation of beans and the curing of pork predate the spuds introduction to Ireland, so this is really looking back in a way.

There was a poem the - Chisholm Trail - from a Time life book about cowboys that I loved as a kid from which I've always remembered a few lines, about bacon and beans.


I'm up in the momin' afore daylight
And afore I sleep the moon shines bright.

No chaps and no slicker, and it's pouring down rain,
And I swear, by God, that I'll never night-herd again.
Oh, it's bacon and beans most every day
I'd as soon be a-eatin' prairie hay.

I went to the boss to draw my roll,
He had it figured out I was nine dollars in the hole.

I'll sell my horse and I'll sell my saddle;
You can go to hell with your longhhorn cattle.

This recipe is based on one best known as Boston Baked Beans - but this is a time reduced version I threw together in Blessington - easily feeds 4 hungry hearty lads.
The Boston classic uses belly of pork - I went for a mild cure bacon.
If you are using bacon don't add salt,more than enough will come off the meat and infuse into the beans.

Pour the water into a heavy based saucepan - oven suitable if you have one.
Add the beans and bring to the boil for about 5 minutes
Remove the heat to a simmer and stir in the bay leaf, honey, tomato puree, mustard powder, garlic and onions
Put the bacon or ham into the pot and ensure it is near the bottom - covered with the beans.
Leave at a steady simmer for 45 minutes or until beans are fairly soft and bursting from their skin

After 45 minutes to an hour the liquid should be well reduced.

Lift the meat out of the pot and cut slashes into the rind.
Smear on the brown sugar, the wetness of the rind should make it melt a fair bit - smear it well.
Sprinkle over the allspice at this stage.

Return the meat to the pot or oven dish buried into the beans but with the rind just clear of the liquid.
There should be enough liquid to just cover the beans - top up with a little water if needed.

Transfer the covered pot or oven dish to a pre-heated oven  on a moderate heat, about 120 degrees centigrade for 50 minutes.
Uncover the pot after 50 minutes and leave the dish in the oven for around another 20.

Serve very hot with a good larger, hotsauce and some crusty bread - and enjoy. 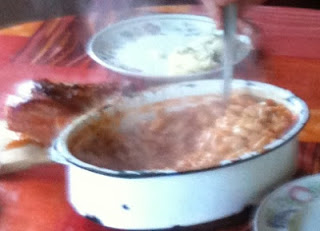 Beans and cured pork were staples in the wild west - as shown in a notorious scene in Blazing Saddles, a movie made in the worst possible taste - and one of my favorites.

Posted by irishkitchengarden at 2:40 PM