Alternative Home Made Ketchups - Tomatoes are not the only veg!!

Ketchup, the All Tomato, All American condiment - its history is a little more scattered and far more interesting than that, and very apt to my current wanderings.
With Summer and BBQs it is really cool, and interesting, to have as much as possible from your own garden, so why not the condiments!! So, a little history and some tried and tested recipies. Use your heaviest pot for these.

The name 'Ketchup' is derived from Amoy dialect Chinese - kôe-chiap or kê-chiap meaning "brine of pickled fish or shellfish", and had no tomatoes. 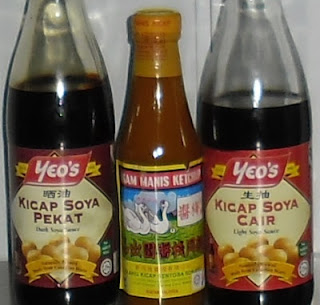 The Indonesian-Malay word for the sauce is kicap, or kĕchap , which just means sauce
That word evolved into the English word "ketchup"

It was first introduced to the West in the 17th century by sailors returning from voyages to the Far East, and has since evolved into the tomato-vinegar based sauce we know today.
In 1690 Catchup was recorded in the dictionary as " a high East-India Sauce"
In 1730 our own Jonathan Swift in Panegyrick on the Dean -
"And, for our home-bred British cheer, Botargo, catsup, and caveer"

Early ketchup's were heavy on salt, thin and quite vinegary - more like today's Worcestershire sauce  but by the early to mid 19th century the Americans had begun to sweeten their ketchup, and tomatoes had begun to become more acceptable.

A man named Jonas Yerks (or Yerkes) is believed to have been the first man to make tomato ketchup an American phenomenon. By 1837, he had produced and distributed the condiment nationally.

Other companies followed suit - like Heinz who launched their tomato ketchup in 1876 advertised as "Blessed relief for Mother and the other women in the household!"
As food laws became stricter - so did preservatives etc. Ketchup was originally saltier, thinner and with more of a vinegar kick. With the banning of sodium benzoate Heinz and others went for more sugar

The Websters Dictionary of 1913 defined ‘catchup’ as: “table sauce made from mushrooms, tomatoes, walnuts, etc. [Also written as ketchup].”

But it was the tomato version that became the dominant condiment on the American, and most European, tables through the 20th century.

This mushroom ketchup is with fish, chicken, meats or pasta, and, as usual, when you make it yourself you control the ketchup ingredients, so you get it preservative and gunk free, you control the sugar levels, and you can even prepare it as organic ketchup.
Real 'gourmet ketchup'!
So why not go ahead and give this great homemade ketchup recipe a try?

Wash and dry the mushrooms, trim off the ends of the stalks if necessary but do not peel them.
Chop into small pieces

Layer the mushrooms in the salt in a large bowl.
Cover and leave for 24 hours and then rinse and drain.

Place in a pan with the remaining ingredients and bring to the boil, reduce the heat and simmer for 30 minutes.

Strain through a sieve and pour into hot, sterilized, bottles and seal.

Combine the apples and water in a large, heavy saucepan. Cook the apples, uncovered, over medium-low heat, stirring occasionally, until the apples are soft and have dissolved into a lumpy sauce, about 30 minutes. (The amount of time will depend on the variety of apple used.) Remove the pan from the heat and let the apple-sauce cool a few minutes.

Transfer the applesauce to the container of a food processor. Process the sauce until smooth. Rinse out the saucepan and return the applesauce to it. Add the vinegar, horseradish, sugar, salt, cinnamon, pepper, mustard and cloves.

Posted by irishkitchengarden at 7:34 AM