Its jam, but preserve sounds posher. Anyway, I am getting glutted by blackberries out here, a nice complaint to have this time of year 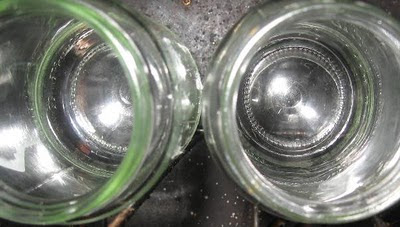 What really horrifies me about jam is the sheer volume of sugar that goes into the mix in most recipes, so I will be experimenting with honey, apples and other variants in the near future. I have what I think is a pretty good idea, but I'd better prove the concept first.

This is the first jam I have made myself. I think the last time I even helped make for that matter, was 1984! My Grandmother made it, as did my mother, but with boarding school, work and other things I have not had anything to do with it since.

What strikes me about fruit preserves is that it is all about ratios.
It is the one thing apart from cake baking that does require a good set of scales, most things I cook are done by smell, taste and feel as opposed to measures, I take them as advice.
When I post recipes detailing measures, I work it out as I go along to make it easier for readers of this blog.

For regular readers as with the Malt and Mustard pickle, this posting will be the basic one on fruit preserves.

In the case of jam it is a pretty much exact science. In essence it is sugar, fruit and water that are reduced, loaded into sterile containers and waterbath sealed.

That is the basic advice, but again, I will be working on a lower sugar content in future. 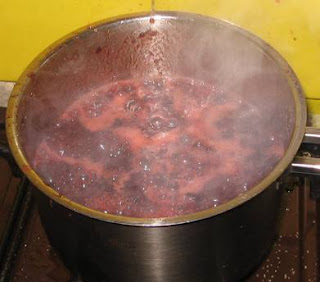 After the ingredients are combined and reduced it is then a question of judging when the blend is ready to gel, if it is at set point.

This is not all that hard.

Get two small side plates and put them in the fridge. There are a range of jam thermometers etc - but the plates are already in the house and are just as good.

Take a shop bought jam or marmalade and spread out a spoonful of the jelly part of the jam on a plate - this is the consistency you are aiming for.

The reason to use two plates is that when sampling, you will always have one and hand that is clean, cold and  available.

When you have reduced your jam, mix it - get it as even as possible in terms of the fruit blend as possible, I use a whisk to do this this.

Using a small spoon, take out a sample and spread it on the cold plate. 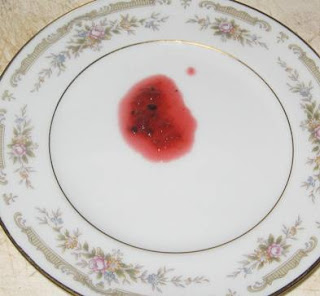 Wait at least two minutes to let the sample cool to a normal temperature on the plate, check to see if it looks right. turn the plate to its side, it should cling on fairly well - no harm if it runs a little. 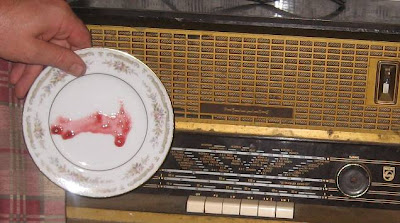 This sample was solid, and gelled well

Some people can tell looking at the back of a cool spoon, but while waiting for the plate sample to cool I check the whisk to see did the jam cling, did it set, or does it drip.

When it looks right and acts right then it is right.

Sterility is key to a good preserve or pickle.

First thing I do is boil the jar for 10 minutes in the waterbath with their lids. 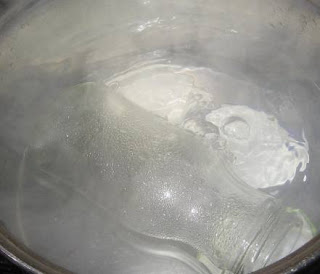 As you get ready to pour the jam, move the glass jars to an oven.
The lids remain boiling in the waterbath.

Turn the oven heat to 110 degrees centigrade
By the time the oven reaches this temperature, the jars will be dry and sterile.

Decant the jam into the hot sterile jars, always be mindful and act sensibly, use oven gloves or kitchen towels at all times when handling hot glass.

After loading into the sterile jars, make sure the lip and threads are spotlessly clean.
Give them a good wipe with kitchen towel.
Use wax paper or clingfilm over the jar to create a barrier between the lid and the jam.

At the last moment, remove the lid from the boiling waterbath
Put the sterilised lid on hand tight and waterbath for ten minutes.
Remove the jar sealed jar from the waterbath and store in a cool dry dark place.
It should keep for about 6 - 8 months.
If you can, try to hang on to old jars with the pop-top / anti tamper type lid (the one with the tin nipple)

If you have followed the procedure correctly, this should depress into the safe position as the jar cools, giving a secure air tight seal.

Its actually a really nice sound to hear them click and ping into position as the jar cools, sound of a good seal and a job well done.


A NOTE ON SUGAR

Part of the concept of the garden plot is the reduction of food miles. I was going to urge the use of Irish products i.e. Siucra or Gem, but now would advise Fair Trade brands
Sadly, no sugar has been produced in Ireland since 2005, so its hardly guaranteed Irish, but the brand name is.

That means we have no idea where the sugar or its beet or cane comes from originally. I don't even know if it is GM free.

The Irish Sugar Company/Greencore sold their Sugar business overseen by Tainiste Mary Coughlan, who was at the time Minister for Agriculture, to Nordzucker in Germany. The sale closed the last remaining sugar production companies in Ireland. This also means that in the future, due to short sightedness, we are way behind if there is ever to be sugarbeet ethanol production.

The Siucra brand is up to 30 cent dearer than other imported brands and more than likely all the sugar is coming out of the same packer. Hence my advice to go with fairtrade. At least that way you will have an idea as to where and by whom the product is made.

The Irish Shopper is being fooled to pay extra for a trusted Irish brand name that sadly has no links to the country.

Its a very good example of what Naomi Klein wrote about in her book No Logo. It is the brand itself that is important, regardless of its production methods, location, economic benefit or inherent value, the item itself means very little, be it a product or person.

Greencore and Nordzucker kept the deal as quiet as they could so as not to draw notice to the change as many people believe the brand Siucra is still Irish.

There is also the factor that many of the big UK sugar companies started out in the 17th century using slaves on Caribbean plantations, so I'd rather not reward the inheritance of that shameful legacy. 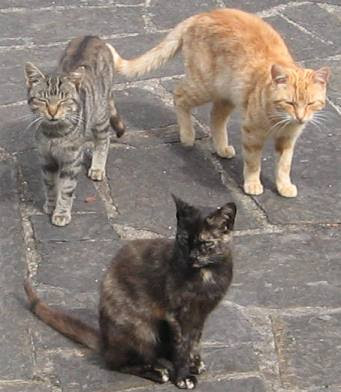 Random cats to end on a happy note

Posted by irishkitchengarden at 4:47 PM