Part of life in Connemara is our harsh winters, so we need fuel.
Oil and gas are expensive, and trees take a lot of time to grow.

What we do have is bog and turf.

Neighbours, my family and I recently had to go through an ordeal when a quarry company tried to claim ownership of our property - so I'm damned if someone else is going to do so.

Of course I believe some areas need to be preserved, but banning families taking hand cut turf - not commercial machine cut - from family plots is just plain silly when the Council were quite happy to allow someone to claim the area to quarry commercially, despite their being turf plots owned for generations there.

Galway coco do not even properly enforce planning or dumping out here - let alone the environment.
In a recent local case, neither they - nor the dept of environment, would do anything about damage to the NHA - each saying it was the others responsibility.

The Minister for the Environment has just allowed the drilling of boreholes for a pipeline in an SHA, but that is for a big company.

They need t enforce current regulations, not make up new ones that they will just ignore.

I have left my own bog set aside, but neighbours whose cattle graze the farm deliver one tractor of turf per year, and that's all that is needed for the year.

Just finished my turf stack, so I thought I would post it here - its a quintessential Connemara thing.

Most people now use sheds, but a well built turf stack is aesthetically pleasing, and stays dry.

Anyway, here is my attempt of a turf stack 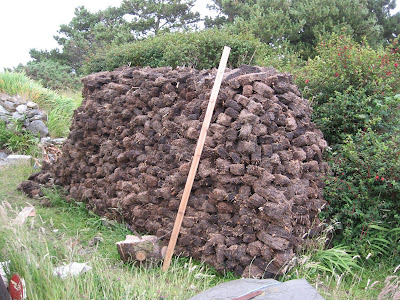 Like non-commercial fishing for the home I believe it is an indigenous right to cut a reasonable amount of fuel from designated, owned plots for the home.
This is what we take on an annual basis - 1 tractor load.

The Government wants to stop this, but neither the Dept of Environment or Galway CoCo will take action on dumping or quarry damage to an NHA in this area, in fact they have done everything to do nothing, I am very happy that Minister Gormly has ordered an investigation into Galway CoCo -

But they should enforce regulations they have now instead of introducing new ones.

Anyone concerned about turbury rights should check out the facebook group

This group involves Cllr. Luke 'Ming Flannigan, a very progressive and environmentally conscious politician who I have known for a few years, and I would like to offer my congrats to him on his election as Mayor of Roscommon, shame he left Galway, he is a loss to the county, we end up with crooks like Stroke Fahy

Anyway, for those readers outside of Ireland, turf stacking is a hard job on the croft - but come the winter its well worth it

Posted by irishkitchengarden at 2:50 PM