Well, I always wanted to do this, these were literally from plot to pot and pickled. Its not that tricky a job, but there are a few major pointers highlighted in the blog.
Main thing is to keep everything clean as you can, the rest is simple. 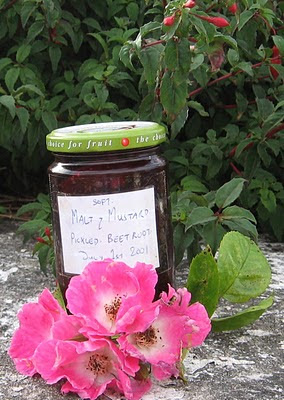 After a lot of research, I found some of the best advice at gardenfork.tv and pickyourown.org as a basis, but there are a few extra bits and bobs.

I have grown what I am assured are a hardy gherkin, but they are not up yet, so the beets go first.

I bunch cropped the beetroot - two types grown at different intervals.
One type was Bolthardy, a fairly common variety, the other was Golden Burpe.
It was time to start cropping, the first sowings are big enough to pull, and the later sowings need the space.
To get a nice red pickle I went for the bolthardy, and they do seem to grow faster than the other type. 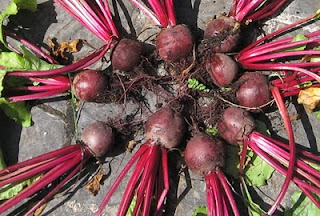 The only vinegar I could find locally was Chefs malt vinegar, but I will be using cider or wine vinegars down the road. Certainly, in theory, I could make my own cider vinegar from local apples, so the next batch will be done with cider vinegar.

The first step was to top, tail and peel the beetroot. Some folks say just boil them and peel after prior to pickling, that is your choice.
But, to maintain as much of the original flavour and nutrients I roasted most of them tightly sealed in tinfoil, to let them steam in their own liquids.

I kept enough for one jar to be blanched and loaded, nearly raw as an experiment on texture and pickling, but the general rule with beets is to cook them prior to picklng.

MUSTARD AND MALT BRINE
Before you do a brine yourself, do a bit of research, I went with what I had in the house
Also test as you go, balance it up to suit your palette, its very easy to vary.
If you want a sharper taste, add lemon juice or more vinegar, a sweeter taste add more sugar or honey.

When tasting, take very little brine in the spoon, have a glass of water on standby and try not to inhale the steam, trust me, its an eye watering lung buster.
300ml distilled malt vinegar
200ml malt vinegar
250ml water
4 tablespoons Lakeshore wholegrain mustard with Guinness- or mustard seed if you like
1 heaped tablespoon of salt - Try to find non-iodized sea salt
4 heaped tablespoons sugar
1 tablespoon honey
1 small onion 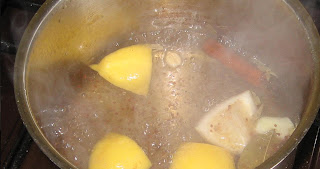 Bring to the boil until sugar and salt well dissolved.
MAKE SURE THE WINDOW IS OPEN IN THE KITCHEN - the vinegar can be bloody strong when boiling.

CANNING/JARRING
I'm sure you can buy jars and lids - these are best, but I just recycled some jam jars.
These need to be spotless - as do the lids, I washed and rinsed several times.


You will need at least one pot with boiling water - this is called the canner.
I used two, I use a fish kettle to maintain sterility and a pot to use as the canner. 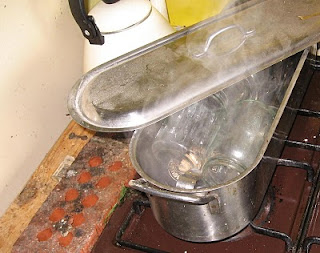 Handle with care, I got them really hot using the fish kettle as a steamer, so they were at least 100c coming out.

I used a pair of oven gloves, but there are special thongs etc if you intend on doing this on a regular basis.

Carefully remove the jar from whatever steriliser you are using, move fast. The idea is to fill, clean and close as quickly as possible to maintain sterility.

I placed a bit of ginger, some fennel thinning's, a little chili and a clove of garlic in each jar.
Then I loaded it up to within 2cm of the top with the roasted beetroots.
After that I ladled in the hot brine, the only thing removed from the kettle were the lemon rinds.
Everything else went into the pickle jar.

Cover the beets, I filled to within 1cm of the top of the jar.
YOU MUST LEAVE OVERHEAD SPACE BETWEEN THE LIQUID AND THE LID

Have a clean tea towel or kitchen roll at hand.
Make absolutely sure there is no residue inside the lid of the lip

Give the threads and the lip of the jar a wipe - make sure there is no residue of any kind where the jar makes contact with the lid.

After that I transferred the jars to the canner, a deep pot half filled with boiling water.
Cover and let sit for 5 minutes
With the lid off, this causes the pickle to steam, lowering the air pressure just above the liquid.

One thing I found was taking clingfilm, hold over the jar mouth. Slowly lower the sheet (peel/sterile side down) over the jar mouth, because of the heat of the jar, the clingfilm will close in on the grooves.
This stops contact between the metal lid and acidic pickle, so the taste will not be spoiled my metallic contamination.


I then put on and and hand tightened the lid.

The jars sat there for another 10 minutes.

Remove from canner and allow to cool.

I was very happy to see the vacuum tabs on the jars depress.
I could hear them click, or ping back down into position.
That is the only indication that I have of a good, airtight seal.

Another trick is to invert the jar, and make sure there is no stream of bubbles getting in, this is especially true if you have a piece of plastic between lid and lip.

These can be kept in a fridge, or a cool dark place

SHELF LIFE AND STORAGE
As far as general rules for shelf lives of common veggies and fruits jarred foods do well stored in a dark, dry and cool place.
Be sure to label all jars with pickling date.

Glass is inert, but the lid is not. Some people advise putting a small square of clear plastic between the contents and the lid - as you will find with home made jams.
The only reason I did not do this is that I did not have a suitable plastic, fairly sure a cut square of a sandwitch bag would do the trick.

From what I gather on the Internet, you are looking at 6-8 months shelf life with common jam jars.
Using proper pickling jars and new lids, its longer.

Generally speaking, spoilage is indicated by:

The lid is bulged or flexes (isn't sucked down tight), then gas has built up from decay.
Any signs of seepage or leaks (the jars should be fairly clean come out of the water bath).
Finally, an off smell, visual signs of mold, or a change in color or texture from what it should be!

Anyway, I will keep people updated as to how it goes.

Posted by irishkitchengarden at 9:17 AM