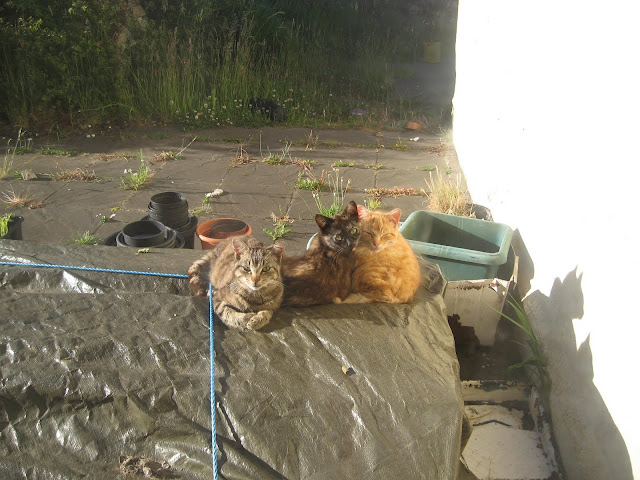 Well, the biggest pest I have found in the garden is not slugs, snails or worms - it's 3 kittens and two puppies.
The kittens are sort of mine, their mother used to hang around and turned up one day with these three.
A cousin of mine called his dog Dev, so in retaliation I named these three (left to right) Vladamira (after Lenin) Joesephina (after Stalin) and Leon (after Trotsky)

Vlademira is the quietest and shyest, Joesephina is exactly like her namesake, going into places where she is not welcome - but even though she is the smallest, she is a ruthless and successful little hunter.
Leon is just a scrounger, rarely leaving the front door - but of the three he is the most tame.

They are fairly feral, certainly not house cats, but their mum, Southpaw, died - and as she was a cool cat I kinda ended up adopting these three.

They have two pals from next door - two pups called Jack and Brownie who visit on occasion, so as I wander around the veg garden I am usually stalked by two enthusiastic pups and three howling cats - none of whom I regard properly as my own! 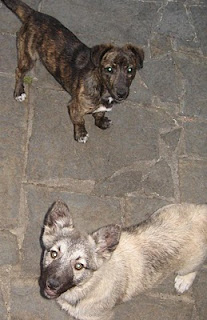 They do add character to the place, but the amount of work I have had to do to keep them out of the veg beds is nuts, I wish they did not regard them as the biggest toilets they ever saw.
It is true what they say, that dogs have owners, cats have staff - these three little hooligans seem to think my sole purpose in life is to feed them, and that's about the only time I get to handle them - but they do make me laugh, especially when they get stuck in trees, and their undignified descents

On the note of a kitchen garden and pets I came accross another blog, not unlike mine --
food flora and felines -- well worth a read

Posted by irishkitchengarden at 4:53 PM