Despite my best efforts the cats are still not impressed, but my kohlrabi has started to come of age, and I want to use them.

Also, today is important as it was the first new potato's I lifted.
In our family, my father would always grow crops for the kitchen. We always had them planted by St Patrick's day, and lifted for the first time for St MacDaras day (July 14th)

I was concerned about floppy-ness in the helms, or potato stalks, so I uncovered the bottom of one of the auxiliary ridges, and much to my delight I uncovered a few small potato's, they are still a little small and remaining plants will get a few more weeks - but those from the test dig get cooked tonight. 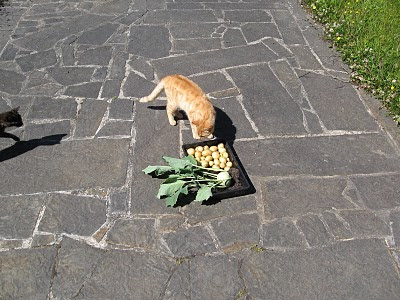 I haz had nuff

The name is German, Kohl is cabbage, plus Rübe ~ Rabi, the Swiss German for turnip - so it literally means cabbage turnip, and is sometimes called German turnip.
But it can grow almost anywhere. They even have a word for it in Icelandic - hnúðkál !!
It must be one of the weirder looking veggies in the garden, like some kind of UFO.
It is easy to grow, does not take up much space - far less than turnip, so I wish I had planted more of them.

I grew the kohlrabi from seed. The variety I got was Olivia F1 - one of the few hybrids in the garden, it was the only kohlrabi I could find locally, bit of an impulse buy. Next year I hope to get Azur Star or Superschmelz.

Kohlrabi is commonly eaten in Kashmir where it's called Monj, and eaten with the leaves.
There is a spicy version called "dum monj" and non-spicy version is called Monj-haakh that will be dealt with in the future.

It can be cooked or used in salads - a very versatile veg.

The taste is like broccoli stem or cabbage heart, but milder and sweeter. Under 10cm I am told is a good time to harvest as most varieties can get woody.
The easiest way to adapt it to Irish cuisine is use it as a substitute for white turnip.

This first recipe is a mild cooked version based on a German recipe -
As they say in Germany - Mahlzeit!

In a heavy frying pan over medium heat saute onions and kohlrabi in butter until well coated with the butter. Sprinkle with salt and pepper. Cover tightly and cook, stirring occasionally until kohlrabi is tender, about 25 minutes.
Sprinkle with flour and turn to mix. Gradually add milk and cook and gently stir mixture until milk thickens to a smooth sauce. Correct seasoning, adding salt and pepper generously. Stir in parsley. Makes 4 servings.

You could serve this with some stamppot which I have made here before minus the bacon.

But today I'm going for new potato's (first ones from the garden - Orlas) boiled in fresh Atlantic Ocean water.
I simply collected seawater on the flood tide (cleaner this way) and boiled the new spuds in it. Strained them, added a good chunk of butter to the pot after returning the potato's with chopped chives.
Simple, perfect and easy.

This was served with a pork chop dusted in flour and paprika to add a bit of spiciness to the meal.

As a bit extra, I took some of my Japanese Mustard Greens and stir fried them in the paprika/oil remnants for only about 30 seconds, it really added heat, depth and spice. 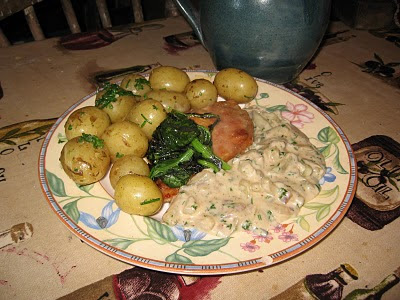 I found the kohlrabi dish and the mustard green to be a delicious contradiction, this creamy clean parsley/mild cabbage taste with the spicy pork chop and mustard greens with the saltiness and texture of the new potato's was a really nice meal.

There is a Grace that my family have always said with the first crop of new potato's, I guess its an old Irish post-famine prayer

I banish cold and hunger from Ireland
God protect us
And may we be alive this time next year.

Posted by irishkitchengarden at 4:58 AM