Well, when I pulled a few Milan Purple Tops for Caldo Vedi, mostly for the greens, I found fairly severe damage to the three small turnips, and found one obvious perpetrator.

Wireworms are a menace, and on research I found out this is particularly true on new gardens, where one had grass growing before.
I wished I had looked into it earlier, but that's life and I hope to limit potential damage.

Going on the usual offensive, I looked into active and passive means of combating these horrid little creatures.
Active attack was nematodes from nemo.ie and passive defence was a home made trap 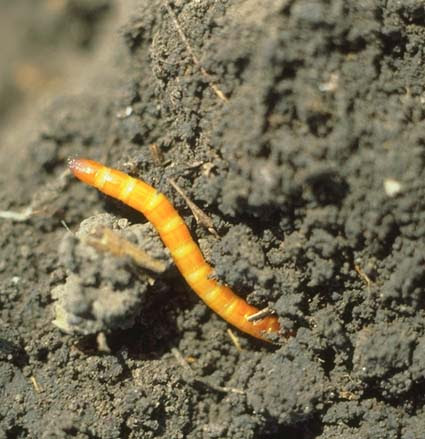 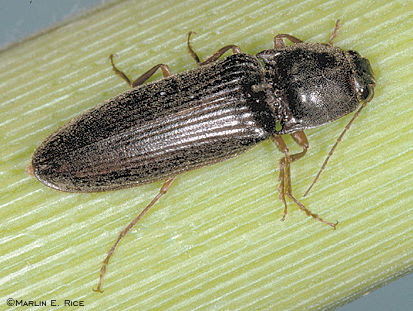 On investigation, I found - on the excellent garden plans Ireland forum (link on right hand panel) that wire worms are the larvae of the Click Beetle.
Click beetles come in a variety of shades and colours, but, pick them up and you will know them , they flick the body to escape and make a clicking sound. They themselves are harmless to crops, but - as always it seems  it is the juveniles who are the real delinquents.

The Larvae themselves seem pretty unmistakable.
A yellow/orange segmented semi hard exoskeleton, they are fairly easy - I think - to identify.
Certainly the pictures on the net look just like them.


With pictures from the forum, and the fact that I had found click beetles it is a safe conclusion that this is the major problem.

Cutworms are another parasite - the larvae of a moth.

Like the leatherjacket, these are insidious little creatures, banging away below the surface and damaging crops unseen until it is too late.

I had previously applied a packet of nemasys grow our own from mrmiddleton.com which controls Carrot root fly, cabbage root fly, leatherjackets, cutworms, onion fly, sciarid fly, caterpillars, gooseberry sawfly, thrips, and codling moth.
Obviously, from the damage, it had not attacked the wire worms.


It attacks only target insect pests. There is no need for masks or specialized safety equipment.


SuperNemos will attack its target insect species; the nematodes enter the host through body openings or by penetration of the body wall.

Once inside they kill the host within 48 hours.
So, I dosed up all the beds, but went fairly heavy on the root crops, and hope the nematodes massacre the buggers that bother my bumper crops.

I found the SuperNemo easier to use than the nemasys type.
It is more economic, being a broad spectrum attacking insect, with the nemasys you need to shell out for each particular pest.
It was less lumpy/congealed than the nemasys I had used before.
It dissolved in the water easily, whereas the nemasys seemed to take more work.
I think this is due to the packaging. 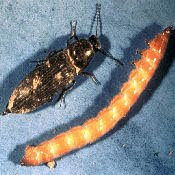 TRAPPING
Trapping is to indicate the level of infestation, it will trap some, but the primary safe, effective and organic way to deal with cut worms etc is still the supernemo's.

The simplest way to trap these buggers is just skewer some raw potato on a stick and bury it in the ground.
You could set some potato traps in your planned planting area about three weeks before you plant the crop.
Dig a series of four-inch deep holes throughout the planting area, pop in half a potato, cover with soil, and mark with a stick.
A day or two before proper crop planting, dig up the traps, which now hopefully contain the wireworms to be disposed of.

Because of my worries about infestation - and wanting a more robust system, I did a little further research.
These guys are opportunistic pests, they attack most root crops. 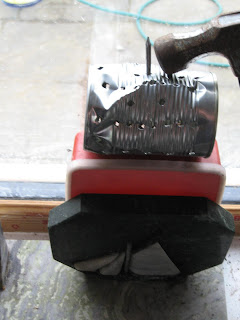 I also found out they are attracted to carbon dioxide, which plants produce when the germinate
I got an empty cat food tin and using a 6" ail punched a series of holes in the side and the bottom.
The nail stays in the tin to secure the bait. 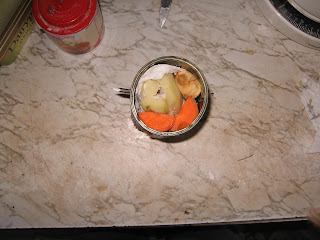 Then I baited it with a potato and peels, a bit of carrot etc. - the crops that one finds in that particular bed.
Peelings and scrapings can be used for this.

In addition, for this experiment, I loaded the spud with some baking powder soda, which gives off CO2 when it gets wet, that's why it is used for rising bread.

I plan on getting one of those plastic tin sealers and perforating that to improve on the design. 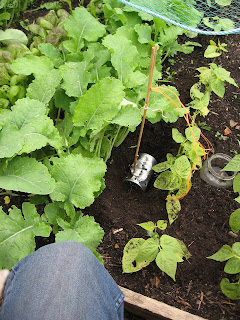 I buried the tin about 10cm into the ground, so that means the trap is at different depths. 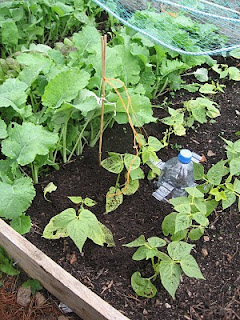 It was then marked with a flag stick for recovery next week and covered over
In the photo above you can see two home made traps in position and baited, the beer trap for slugs and the buried wireworm trap
Anyway, I will update on how it works as the season goes on, as these beasties dig deeper over the course of the year.

Posted by irishkitchengarden at 8:32 AM