This recipe is based on one from my absolute favourite TV cooks, the BBC's Two Hairy Bikers, so I am delighted to alter it for local garden conditions.
Despite Leon here (after Trotsky) and his sisters - the biggest garden pests that I have - their best efforts at turning the garden into the biggest kitty litter box in the world have failed.
I am beginning to see the fruits, and veg, of my labour. 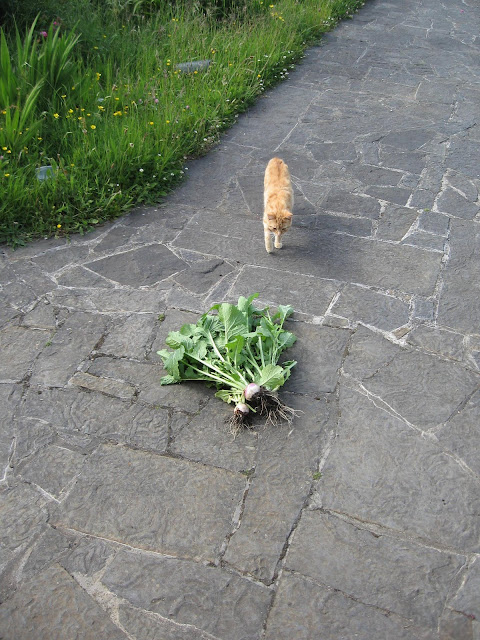 Oh Hai, dis not cheezburz, when I can haz cheezburgurz?
If you haz burger I iz in garden pooping on your plants.

David Myers and Simon King, seem to be the most unpretentious lads, they obviously love what they do, cooking around the world where they appear to constantly skirt disaster.

Their style of cooking is easy to follow, and I do a lot of their eastern cooking.
Being from the North of England they really know what they are doing in that area,

This is my take on their Caldo Verdi.

I think Si and Dave would be familiar with this blend of greens and potato, as there are traditional North of England recipes using turnip tops and potato.

Its a dish I am familiar with having spent a fair bit of time there and worked with several Portuguese and Cabo Verdian crews.

Caldo Verdi is considered by many to be Portugal’s national dish, and is found everywhere — from posh hotels to the smallest country home.

It’s a versatile dish: Serve it as a one-course meal at lunch or as a light supper in the evening.

What’s most important when preparing it is that the greens are cut into extremely fine slices; that’s what creates the soup’s distinctive character.

Because I am using thinning's, trying to tidy up some turnips, it will be a little more turnipy than usual, but the type are Milan Purple top, which are a very mild Italian heritage variety. 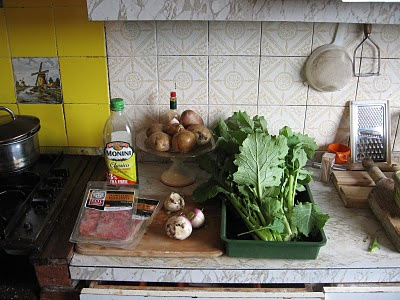 All the greens came from those three small turnips

200 gm chouriço, choritzo or another dried Iberian pork diced A good Salami is a viable alternative
1.5 litres of chicken or veggie stock

2 bay leaves
Level teaspoon Paprika
Salt and pepper to taste
Olive oil, about half a cup for drizzle
Method

1. In a large pot, heat some olive oil over medium heat. Add the onions and sweat until they are translucent.

2. Add the garlic, paprika and the sausage and cook until the onions have been well coated with the fats rendered form the sausage.
Veggies can leave out the sausage, but you will have to add extra salt or substitute sun dried tomato.

3. Add the diced potatoes and turnip, sweat them a little, they will absorb the flavours

4. Add the stock, seasoning and bay leaves, and bring to the boil, then simmer until potatoes are soft.

Season to taste, don't be afraid of the salt with this one.

5. Meanwhile, remove the stems from the greens and very finely chop the greens, really fine.
I just used the turnip tops in this soup, but kale, cabbage and other greens are good as well.

6. When the potatoes and turnip are soft, whisk the broth to make a thick base.
Some people say to use a blender, but I like some texture in soup

7. Blanch the greens with boiling water to take off any bitterness, i.e put them in a strainer and pour over some boiling water, they wilt quickly.

8. Add as many greens as the soup will support - if you want heavy soup add loads of greens, if lighter, add less.

9. Simmer for a few minutes. The soup will go a really nice golden colour with a jade.
The more greens you added, the greener it will go - my limit was what I pulled from the garden with three baby turnips.

10. Ladle to a bowl - Swirl in a little olive oil into the soup. You can liven this up by adding a little Paprika, Tabasco or piri-piri which gives it an exotic red dash, and more spiciness.

If you want to go vegetarian, you can of course omit the chorizo and compensate by adding more salt to season the soup, but the final drizzle of olive oil when serving is essential.

I plan to try it with anchovies or smoked mackerel some time, but one would need to reduce the amount for those strong flavours.

Serve with some crusty rustic bread, or as I did a salty soda bread, and - as the lads say - wallow in praise!

As they say in Portugal, Bom apetite! 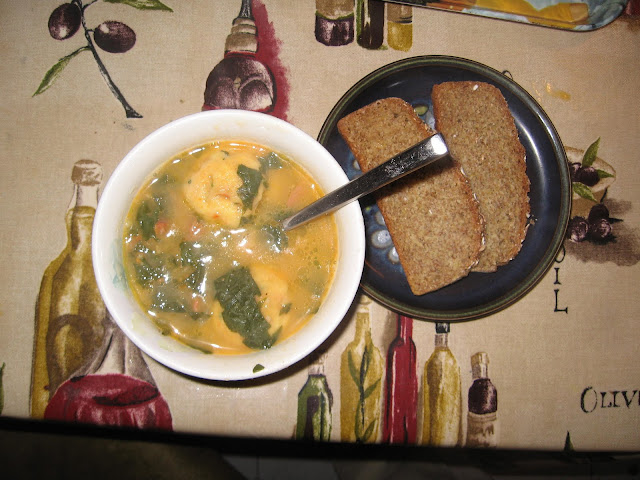 I also made dumplings for this soup to add volume, and reduce waste.

If you have saved any dough then this can form the basis of a dumpling.

I had about 100 gm pureed carrot and parsnip mash left over.


To this I added 250 gm plain flour, 1 tbsn of baking Soda and 50 gm butter.
I threw in some finely chopped parsley and chives.

Knead into a paste, then roll into balls smaller than a golf ball. 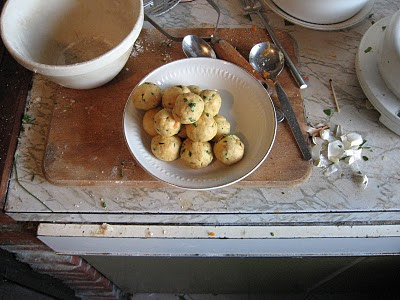 Posted by irishkitchengarden at 1:25 PM