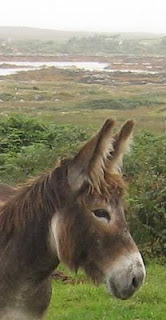 I have a good lifelong friend, Mikey, to whom I mentioned one evening that I needed something to keep the furze on the farm down.
He said he might have an idea.
I thought nothing of it until the next day with a hell of a headache I was woken by what sounded like the gates of an old testament Hell being ripped asunder.
Actually, the din described by Dante would not have begun to have the same effect on me.

I don't know if readers have ever heard an Ass' roar at point blank range, but Shock and Awe do not even begin to describe its effects.

Mikey had a fairly surprising solution to my problem, and his as it turns out.
His problem was a young jack who was surplus to Mikey's Donkey requirements.

Deciding to kill two birds with one stone (and nearly killing me in the process) Mikey had delivered Delaney to my doorstep.
Delaney is named after a childrens song and a horse called Fr. Delaney (coincidentally the name of the local parish priest here years ago)

After my eardrums stopped reverberating like bass speakers I decided - for want of a better expression - not to look a gift horse in the mouth.

I walked Delaney, who was easy to handle because of a beautiful old bridle he had, down the farm to see his new home.
Released through a gate he seemed pleased and also seemed to get on with the cattle that a neighbour grazes there occasionally.

The next morning, despite the departure of his bovine field mates he seemed happy enough.
That evening when I got home I went down to see him.
Delaney had deserted the farm.

Enquiries of an equine nature the next morning started to explain the sudden Donkey departure.

A neighbour, Con, informed me he had seen Delaney the previous evening in a flight to freedom, racing down the road at a speed that would give Sea the Stars a run for his money, ears pinned back, a smile on his face and an occasional backward glance.

But I located the absconding Ass.

He was staying at a neighbouring farm, a real one, about half a mile away, run by two expert Stockmen.
The two brothers, Tom and Paudie, are really brilliant with farm animals.
They had no problem letting Delaney stay and advised me to leave him there a few days to settle down.
During his dash to freedom,Delaney was diverted by an aptly named young L-ass. 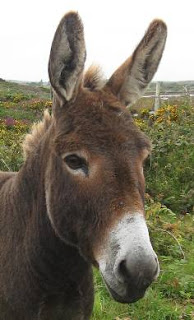 He was safe there and had the company of other Donkeys, in particular Delilah, a jill, who had become the object of Delaney's affections.

Delaney's field and board cost me several of my prized Tipperary turnips, pickles and a few jams.

They felt that if Delaney was lonely he would wander, and very kindly decided that Delilah would stay on our farm to keep him company.

I went over this morning as instructed and Tom got the two new best friends ready.

I was really impressed by the way he could handle the animals, taking a simple rope and tying up a bridle for Delilah in seconds.
Delaney has lost his, probably an antique, so we are still looking for that.

Tom assured me that Delaney would follow me and Delilah home and he did in his own way - the scenic route.
I had to tie Delilah to telephone poles and go down every boreen to get Delaney back on the road.
Much to the amusement of every house on the road and the photo opportunity to half the tourists in Connemara the half mile walk feels like it took at least an hour as Delaney inspected every side road and flower garden en route.
Con's loud encouragement to Delaney to 'run boy, run' was an added distraction.

Finally I stooped being a traffic hazard and delivered him - for a second time - to his new home with his new friend Delilah.

I'm not quite sure what I have let myself in for, but it seems like it is going to be interesting, One thing I am sure of is that in future I will be careful when speaking to Mikey, and if he ever reads this, mate, a petrol strimmer may have been a quieter solution. I am also sure at this stage Niall and Caroline who I believe read this blog on a regular bases are on the floor in tears laughing at my assinine adventures.

But whatever I say about strimmers, Delaney is a dote, as is Delilah. 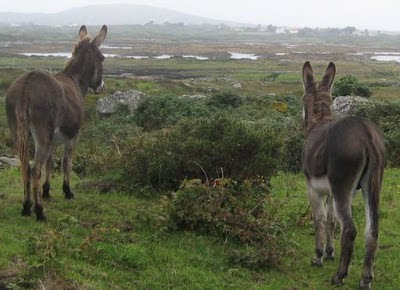 Even in a time of recession, a young couple make a start in a new home

Posted by irishkitchengarden at 10:18 AM