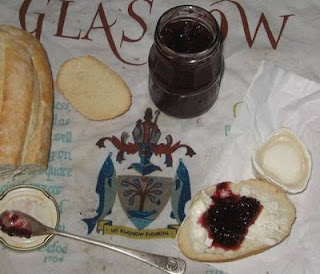 Sugar in Jam does two things, it preserves and it gels.

I am not one that worries too much about food intake, sugars, fats etc. but I was so shocked at the amount of sugar that goes into a preserve even I knew that had to be bad for you

But in my attempt to reduce the sugar content of the jam I decided to give this a go. Its an experiment.
How it turns out in terms of shelf life I have no idea, but I am fairly confident that it should last at least 4 months after proper waterbath processing.

Something we have in abundance all along the shore of the Island is Carageen moss.
This is a natural gelatin. It free and available, so I decided to go with that.

Adding carageen to the mix will force it to gel, so that is one aspect of sugars contribution.
Rememember - when you pick carrigeen, put it on the draining board and pour boiling water over it before you dry it.

Pectin will also do the same thing, this can be bought in stores or you can make it at home.
The rcipe for that is later on

The less ripe the fruit, the more natral pectin, so I went with about 10% of unripe (red or green) blackberries

In a recipe for carrot jam (which will come later) Mrs Beeton's Book of Household Management 1861, she added brandy at a ratio of 1 tsp per pound of mix to a preserve to make sure it would remain good for months. The alcohol, just another sugar really, in her recipie is what keeps the preserve.

The obvious problem is with its low boiling point, the alcohol cannot be added durning the cooking process, so it goes in at the last possible moment - just after filling up the jar before the lid and liner go on.

So, I decided to do a Blackberry and rhubarb jam, but reduce the sugar content drasticly, to half the normal ratio. Its still a lot of sugar, but at least it is a start.

As far as I know, looking on the net, this is the first time someones written about making a conserve in this way, so I am a little proud of that - Delaney must have inspired me.

(or any other strong drink with a volume of about 40% volume/80% proof e.g. slivovitz, rum, whiskey, vodka, gin, you know what you like) 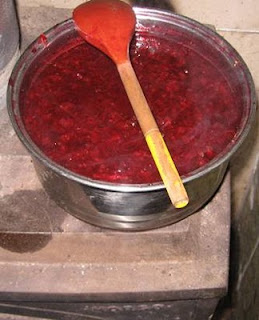 Put the sugar, water, honey, apple, lemon juice and honey to a large pot, mix, bring to the boil.
Reduce heat and let it simmer on a low heat to reduce.
Soak carrigeen in cold water in warm water for 15 minutes, squeeze out excess water and add to the pot.

Now, because of the reduction in sugar this needs to be reduced more than normal, your looking at 30% reduction at least. Because of the energy requirement I just did it very slowly on the Morso, so timing will differ.
When the mix has reduced do the gel test.

Some people like to remove seeds, carageen bits etc. using a cheesecloth or jam strainer, but you should be able to fish out the carigeen f you dont want it, I left mine in.
But if you want to strain out bits, hit the mix with a handblender first

After filling to the mark add a teaspoon of alcohol - (the mark is just below the thread - take a look at any full commercial jar for an indication, thats where the fill should end

Dont forget to leave headspace in the jar.

bottle and water bath as per instructions in previous posting.

If waterbath is done properly, I estimate a shelf life of at least 3 months -
probably about 6 months I would say.

I ended up with a mix that was just a little too runny, but next time out I will just keep reducing a little longer and increase the amount of under-ripe fruit - maybe just a little more sugarthat should solve the problem.


I would really like it if others that gave this a shot gave me feedback on their results, that would be great

It is just that little bit different because of the seaweed, so I think that by a few minor adjustments we may be on to something. 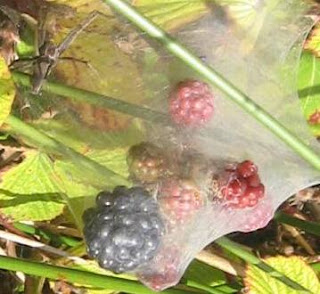 Mr Spider owns this one

Posted by irishkitchengarden at 5:31 PM