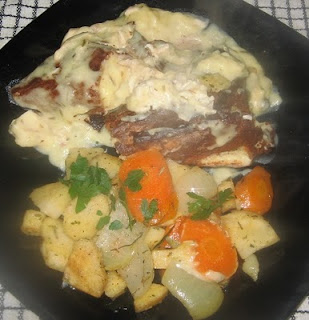 Gougere is a specialty of the Burgundy region. Traditionally, gougere's are made with gruyere, the well known swiss cheese with the holes - but other cheeses are sometimes used.

With recent cheese give-aways** in Ireland, perhaps I should start concentrating on recipes of this nature!!
This recipe is a real recession buster - This recipe is a great way to use up left over chicken, and makes a change from the normal chicken leek or mushroom pie. With Christmas coming, I think it is also a way of using up turkey next month.

Its a lovely warm velvety oven dish for the winter, and with the oven on the go you may as well take advantage of that to roast or bake veg to accompany the meal.

Essentially it is a rich, flavoured crust made from Choux pastry, used either for savory wraps or open pies.
Very easy to make, especially with the assistance of a blender on slow speed.
With this recipe, as always, I have incorporated Irish flavours and aspects to it like cheddar, and in this case the use of buttermilk does add a lot to the final dish.

If you use this recipe, or adjust it to suit your own tastes, please take the time to leave comments and thoughts here, I do appreciate the time and effort

I used Cuinneog buttermilk and butter. For me it is supporting a small family company from our next door county, and as I have said before - I always try to support small Irish companies.
More importantly, for me, the flavour and the product are simply far superior to other mass produced brands on the market - fermented longer than usual and free from preservatives etc.

The main flavours to the filling of this dish are lemon and French tarragon.

I grew tarragon in the garden herb patch, and it is an underused herb in Ireland.
French tarragon is grown from root divisions, just like horseradish - whereas Russian tarragon is apparently grown from seed
Tarragon is easy to grow in any sunny spot well drained spot. It can be grown with other plants in a flower bed or border, given a little room to itself as it is not a great competitor. 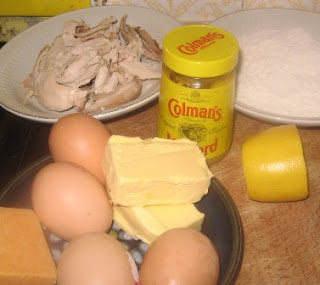 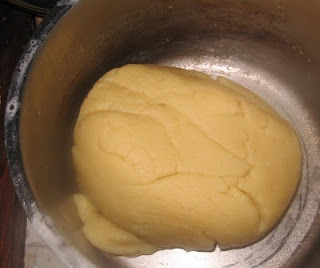 CHOUX PASTRY
Place the buttermilk in a pan with the butter and heat gently until the butter melts,.
Bring to the boil.
Remove from the heat, add the flour and salt.
Beat in the flour quickly to produce a smooth paste which comes away from the sides of the pan to form a smooth ball as shown in photo above.
Set aside to cool slightly.

Personally, I remove it from the pot to the blender and then use the pot to make the filling - saves on washing up.

The following can be done by hand, but I just use a blender on slow speed.
Gradually beat in the eggs to give a smooth glossy finish.
Fold in the grated cheese.

This mixture is spooned or piped around the side of a greased ovenproof dish, an oval dish is easiest.

FILLING
Make up the white sauce*
Add tarragon, mustard, lemon and chicken, stir in
Simmer on a low heat for 5 minutes (while piping/spooning in pastry to dish)
Pour into the centre of the dish.
Bake in the oven for 40 minutes
Sprinkle with paprika - serve hot. 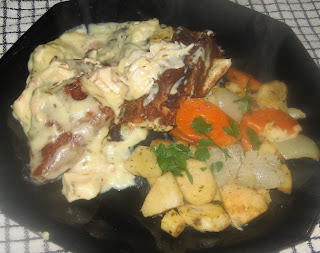 The Gougere is shown here served with baked garden veg, Very simple and energy saving recipe.
I just sliced some parsnip and carrot - roughly chopped an onion, two cloves of garlic crushed and herbs (root parsley, thyme, fair whack of salt and some pepper)
Chuck them in a shallow oven dish with some olive oil, cover with tinfoil and put into the oven when you start to preheat it for the gougere, the cooking time for the entire meal takes about 50 minutes that way. 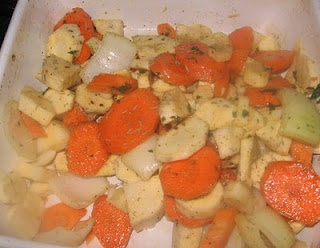 Melt butter on a low heat in a pan
Add flour and blend in with butter
Add milk, whisk. 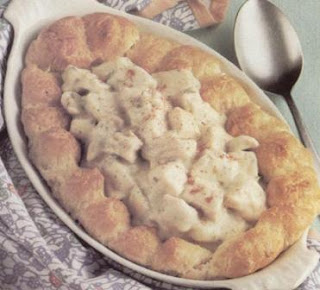 =============
**I cook in part to relax, and I do try to keep politics and recreation apart.
However, with recent developments and the great cheese give-away in Ireland following cuts in social welfare and the public services, an ITF / EU intervention we were told was not happening or going to happen. That was until we saw talks were taking place on BBC, Al Jazeera, CNN, Sky news et al.

Then RTE mentioned talks a day later, and despite denials it looks as if a massive bailout will go ahead, one for the banks that is that will cost us, and the next two generations.
Further cuts due on December 7th there may be more cheese payouts to the general public in lieu of money and services, so I figured it was time to use cheese in something.

As with the foot note on sugar in a previous posting in August, sometimes its only after you write about something that the full truth comes out, as it did recently with Tainaiste Mary Caughlan and the debacle she oversaw that was the sale of our sugar industry.

Posted by irishkitchengarden at 5:21 AM