Lidl are currently doing an offer on Langoustine - or whole Scottish scampi as they are labelled - at €9.99
We know them better as Dublin Bay prawns. 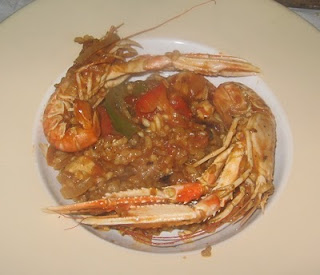 A thing you may not know is the reason the Scots write whisky and we write whiskey is about branding.
Irish distillers altered the spelling to differentiate their product from that of Scotland when exporting overseas.
At the time, Scotch whisky was of quite poor quality, but as they improved in addition to whisky, they also introduced the word Scotch to be synonymous with the drink, a very clever piece of marketing.
It looks that they are doing the same with re-branding langoustine.

Rabbit is not the easiest meat to source in Ireland, its a little different out here obviously being able to hunt them - but chicken makes a good substitute for this recipe.
Rabbit is high protein, low fat and low cholesterol, I am surprised we don't eat much more of it in Ireland, and that it is not that widely available.

Rabbit was actually introduced to Ireland by the Vikings, it is not a native species. The Irish for rabbit - Conin (cuh-neen) - is derived from the Norse word for the animal, in Dutch for example the word for rabbit is konijn.
I detest the practice of snaring animals, it's indiscriminate and cruel. For this dish, if you are shooting, get a head or chest shot with a .22 - if you cant do it, then in fairness you should not be hunting - please take note Mrs. Palin.

The reason for the shot, in addition to humane reasons, is that the back end of the rabbit is used for the meat, most of the front end is used for the stock - but I do advise you keep belly and shoulder cuts for a recipe from the American south - buttermilk fried rabbit - great little dish.
Paella is for some the definitive Spanish dish - It is a rice dish that originated in Valencia and got it's name from the type of frying pan in which it is cooked, a "paellera". The ingredients of a paella vary a lot depending on whats at hand.
It really is a great, colourful dish at this time of year. 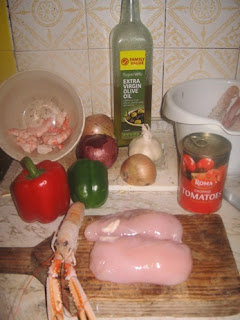 This dish is very easy to adapt for other combinations like mussels, squid etc.
If you are using rabbit or game for the first time, it might be wise to add some fatty offcuts from a pork chop to stop it going too dry. 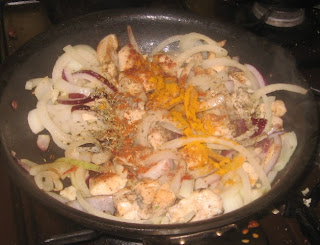 Fry the rabbit, seasoning, onion, garlic, herbs and spices.
Add the rice, making sure the grains are coated.
Transfer to a casserole dish.
Add the prawns, tomato's and peppers and mix gently. 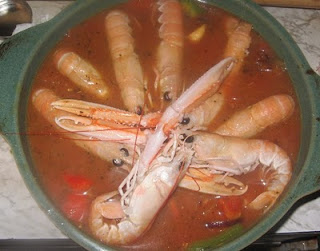 Add the stock - bring it up to the top of the rice.
Cover and put in a pre-heated oven - 180 deg C for 30 minutes - or until liquid absorbed.
Ideally, if you have a big enough frying pan you can leave it cook on the hob if covered, but I don't so I had to adapt the cooking method. 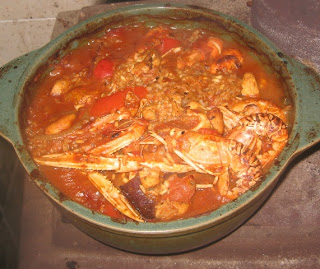 Serve hot, its great fun to eat - breaking open the Dublin bay prawns.
Keep the heads, don't discard them as they make the basis of a lovely bisque. 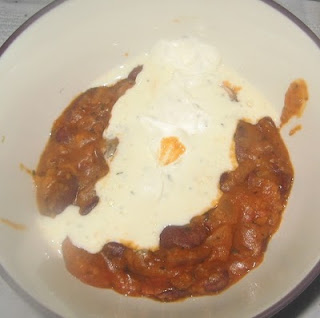 I served with a spicy chorizo and kidney bean side dish with lemon soured cream, it compliments the prawn.

As always, please take the time to comment - the feedback is really cool

Posted by irishkitchengarden at 7:41 AM