So, things are running out, and in the first year of this garden I have learnt a lot.
I will be expanding the plot with two more beds, and cutting surrounding trees to provide more light to the veg patch.

I think the best idea I had last year was the pathway preparation, with the pine needles and ash, it did help against the slugs. 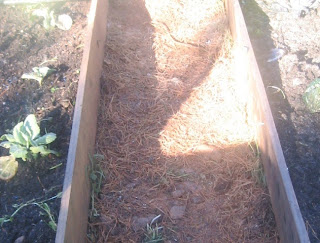 It also gives room to dispose of stones in the beds, a problem we have here in the west.
I am currently renewing the path ways, building them up with needles and ash, to further develop the passive anti-slug barrier.

I already wrote about some of the winter plantings in a previous post.
Other work has been to use the recent cold snap to my advantage, turning the soil to expose the earth to the frost, which breaks it up and I hope it will also kill of some parasites.
Certainly the birds appreciate it when the earth is turned over, as the go in and pick off insects.

I will also start to put down traps for wireworms as well, early in the season to get as many as possible.
From what I have read, the longer the garden is established - the less of a problem they will be as they are worst in new gardens after grassland has been converted to cultivating veg.

Its also time to start thinking about enriching the soil. Along with seaweed I have found that Delaney and Delilah have quite tidy toilet habits - not something I expected from Donkeys, but most of the manure is centred in a few places. 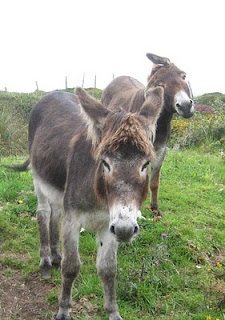 So, with seaweed and donkey doo-doo dug in, I hope that will be enough for my fertilizer needs for 2011.

Weeds growing on the path edge are a pain, there is nothing for it but to hoe them out and backfill with ash and needles.
I am tempted to treat the paths with organic weedkiller, but I'm fairly concerned about salt leaching into the beds.
I do expect to be away a lot more next season, so the garden will have to be low maintenance.
One thing for certain, one of the beds - the one with the rhubarb - is being converted to a different type of bed, with Jerusalem and Globe artichoke, asparagus, herbs, fruit bushes and other annual plants that will be there on a permanent basis, not rotated.

So that's it, my Irish winter vegetable patch - still producing food and getting ready for 2011.
As always, please take the time to comment, I really appreciate the feedback.

Posted by irishkitchengarden at 4:28 AM