Well, just made a start on growing, its that time of the year. It's always great to be able to expand in term of crop types and bed's, but it also takes planning and work.
This is particularly true when working on poor, marginal land like we have in Connemara, its pretty unforgiving.
But I have found some fantastic tool's available in Mayo and elsewhere in the country.
Chillington Hoes- I really don't know how these are not more widely used in Ireland, but they are available now - a list of stockists can be seen at this link. 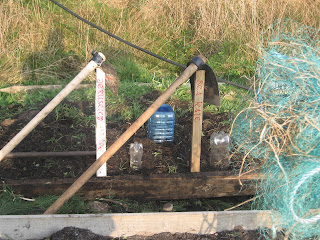 Recently I invested in two tool's from the Chillington range available in Ireland, and the amount of time and effort they save is remarkable, far easier than the usual pick axe, spade and shovel combo.
The tools I bought were a ridging hoe and a heavy duty hoe, or azada.

I decided to convert last years auxiliary potato ridge into a bed for two permacrops - Jerusalem Artichoke and Sea Kale.
This was tricky as I would have to terrace in a bed. I really felt this could even require the hire of a mini digger, but at gardenplansireland.com I saw an advert for the Chillington's, so I made contact with Nigel and picked them up.
After a brief try with it, I knew the tool would save me time, effort and money - that easy.

The whole process to clear tangled ground, clear rocks, open new ground, fertilise, plant, cover and bank up took me about 3 hours, and with a shovel, spade and pick I think it would have taken at least a days work.
I got to say, for a kitchen garden, particularly here in the west, this has become an invaluable tool.

So, the setup was at the edge of the garden to terrace in a new permacrop - Jerusalem Artichoke being the main one.
Firstly I had to open up the trench, which was under heavy, tangled grass and weeds.
The heavy duty ho took care of this with little effort, despite the stones and rocks. In the picture below it gives you an idea of how much stone comes out of a small trench. 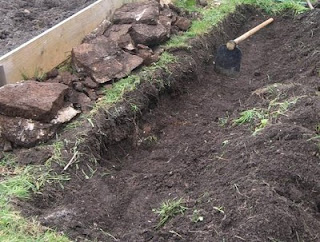 Note the amount of stone on left.

The next step was to lay a bed of permanent nutrients beneath the new crop.
This was made up using seaweed and well rotted manure 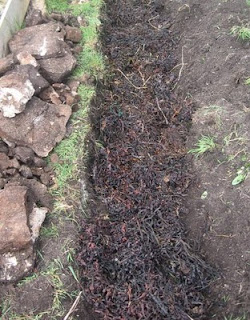 After that I laid in the chitted tubers onto the bed seaweed and manure in a herring bone or zig zag pattern. 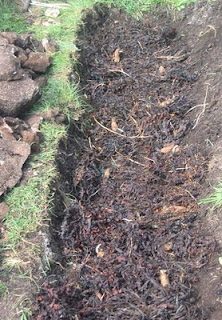 Next step was obviously to get the soil cove on, again done very quickly with the heavy duty hoe.
I used the larger rocks to shoe up the sides of the bed, and it also will allow me to terrace out the next level should I wish. 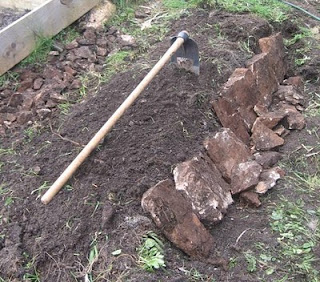 Pushing the bed out, again using the heavy duty hoe I edged the bed and put down some Sea Kale plants I had germinated. 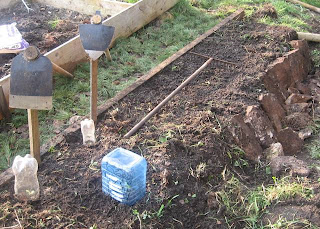 Then it was simply to revert to what I know, laying down a pathway of ash and pine needles over the smaller stones taken from the rocky soil.
As I said last year, the building of the pathway using stone clears the soil and provides a great base.
As the pine needles and ash dry out, it becomes an unpleasant environment for slugs and suppresses weeds. 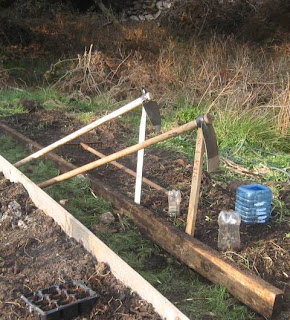 The concept behind the bed itself is straight forward, but the execution - e.g. digging into a rocky incline was always a bit offputting. However,  must say that I found the Chillington heavy duty hoe to make the job remarkably quick.
It also allowed me to start to make a start on opening up two new beds that are on ground with  lot of large roots, this has also been remarkably quick compared to the usual spade work.

As a review, all I can say is that the heavy duty hoe from Chillington is highly recommended

Posted by irishkitchengarden at 5:41 AM