Now, before anyone takes my advice on growing Oca, there is one other blog I would strongly recommend.
That's Ian's Oca test bed blog, this is only my second season growing Oca whereas Ian has been at it for a while. The basis of my knowledge of Oca is based very much on his blog and advice, just an attempted adaptation to the colder, wetter west of Ireland climate. 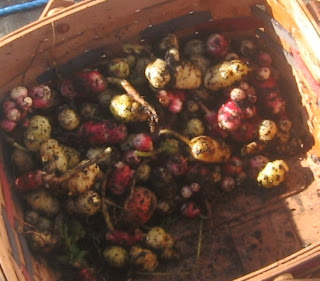 Well, to be stuck between a rock and a hard place in a Connemara kitchen garden is not an unusual predicament, it sort of goes with the territory. 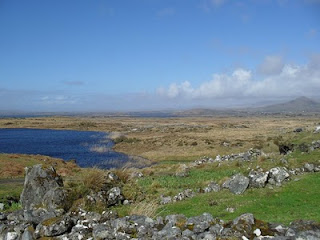 The back yard
Last year I grew Oca, sourced from Christoph at Macalla farm on Clare Island.

It was a good day to start on the tuber tube, I felt it was appropriate having heard the first cuckoo of the spring. Macalla is the Gaelic for the cuckoo.


I was delighted that the Oca grew last year, but a bit disappointed at the yield in terms of tuber size and amount - so having heard of people doing something similar with potato's I have decided to do a tuber tube.

This has the advantages of saving space for starters. It is designed to fit in a nook in the garden that would not otherwise have been utilised on very shallow ground. 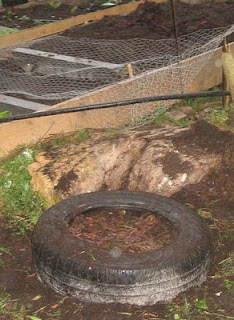 Rock should provide extra warmth
In addition, with a little thought this method will also increase the heat and soil depth available to the crop throughout its growing season, at least that's the theory.
So, where to start? Well, my seed tubers were saved from last year with the intention of growing them again.
Over the winter they were kept in a basket on news paper in a cool dark place.
As Ian advised me, when they are ready to be planted they let you know, they start sprouting fresh green shoots.

Tubers sprouting, ready to rock
So it was off to a local garage in Cill Ciaran where 6 tyres that would probably have ended up as landfill were very kindly given to me free of charge, and more if I wanted.
It should be possible for any one who knows a garage / tyre centre to be able to source these. 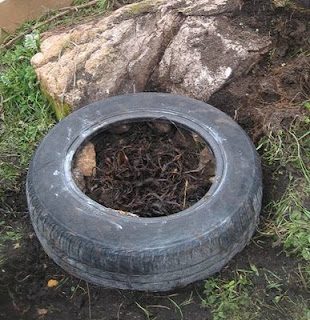 Seaweed base, rocks in cavity
Now, rocks retain and radiate heat, so the first tuber tube was placed in a very rocky corner dug out of a crag to give an even base using a chillington hoe, straight forward.
The cavity of the tyre was filled with the fist sized rocks that came out during digging, soil set aside.
The base of the tube was heavily lined with seaweed to provide nutrients, deter slugs and retain moisture. 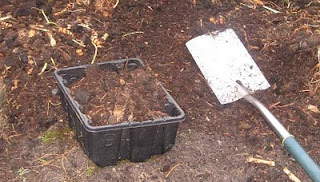 Old turf dust
From the base of last years turf stack I pulled a few buckets of small, powdered turf and roughly sieved in what is best described as peat moss, again the idea being moisture retention and slug deterrent. 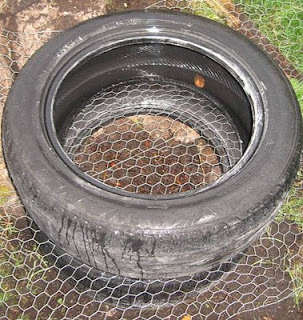 Sieve setup
There is no need to shell out €25EUR on a garden riddle, chicken wire between two tyres will do the trick, just dump on turf dust / stoney soil and give it a bit of going over with a hoe, it's another job for my now favorite tool, the chillington. 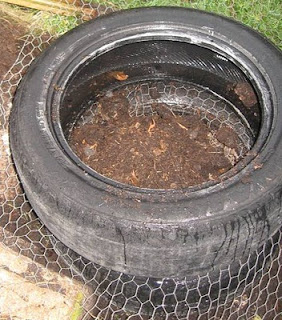 Sieve in use
Onto that went a thin layer of roughly sieved soil, throwing away weeds and roots, adding the small stones into the tyre cavity.

Onto this went the oca tubers, I am doing three in one tube, four in the other to explore growing capacity and yield. Tubers in place
Over this went a layer of soil mixed with a little more seaweed and manure. 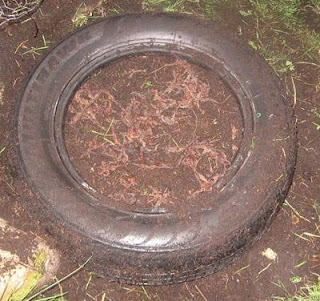 First cover
As usual, prevention is better than cure. As a slug and snail deterent, I surrounded the base with ash, and will dump some pine needles there as always. 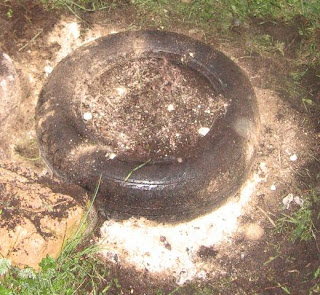 Basic anti-slug measure - turf ash boundry
Because I am using a lot of virgin soil for this, the tube will be dosed with supernemos next week.
As the season goes on, as the Oca grows, more tyres and soil will be added to force the plant up by earthing in a what that would not be achievable on a normal bed.

I hope that the additional heat and depth will produce bigger tubers, and a bigger yield later in the year.
One important thing to remember is that one can buy stacked tubes for potato's, this is not a new idea, but by going to a garage and getting a few tyres, your saving money and taking stuff out of landfill.

Potato growpots do the same thing, but cost about €25EUR for a three tier version, and just use up more hydrocarbon's. In addition, I think the rubber will provide extra insulation.

As always, thanks for reading - if you have anything to add to this post, or any comments or even if you found it of use - please do take the time to comment, I really appreciate the feedback.

Posted by irishkitchengarden at 10:51 AM