There are a few very simple dishes that always work well.
Bisque and Moule mariner are two, and by making and freezing shellfish stock, you always have this at hand - it's simple, tasty and straight forward.

Making the shellfish stock is easy, and also gives you more value for money - and another helpful addition to the garden.

Whenever I have finished with the shells, I put them in the ash grate of a fire.
This way they toast or bake dry. I then break them up coarsely and spread them on the garden pathways. I hope that like egg shells the sharp, broken shell helps in the struggle against slugs and snails, besides, it's a form of recycling and can't do any harm. 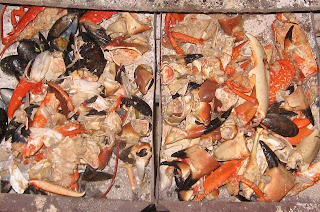 The shellfish stock serves as a basis for two fish soups I like to do. The first is the simplest, and a classic Belgian staple - also very popular in the Zeeuws region of the Netherlands, served on the street every year outside De Mug - one of my favorite pubs in one of my favorite towns in the world.

There are several variations on Moule Mariner, but this one works for me and is pretty true to its Belgian origins but might be better described as a Mussel Bisque with more depth, using shellfish stock.
Quite often the soup in Belgium has additional kick added to it by adding a dash of Pernod, but I just add fennel bulb for that same aniseed flavour. 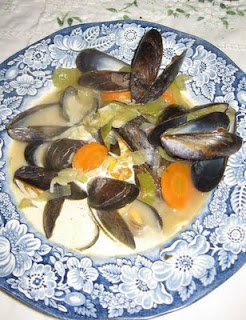 Method:
In a heavy based pot, add a knob of butter and heat until foaming.
Add the sliced veg until softened.
Add the wine and mussels, steaming the mussels for 5 minutes - or until open.
Remove the mussels and set aside, add the shellfish stock and bring to the boil.
Return the mussels to the pot and heat up.
Serve in large bowls with a dash of cream and garnish with parsley - serve with soda bread, warm and delicious. 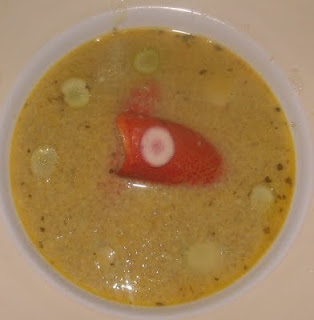 Bisque is just a richer version without the aniseed flavours and contains more meat in the soup.
The mushrooms add richness. Rather than the aniseed flavour of fennel, this gets a kick from cayenne pepper.
Its more a winter/autumn soup than the Moule Mariner.
You can vary it to your own taste of course, one version pictured here was served with lobster shell for decoration and sliced, raw Oca to decorate and to add a citrus style zing to it.

The Oca really works for this recipe, its tart, sharp apple/citrus flavour cuts the richness giving a very nice tang to the meal.
The other photo has cream and lardon croutons. 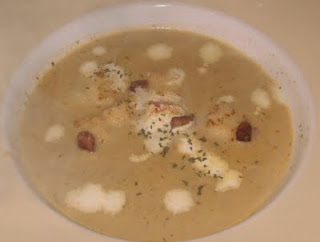 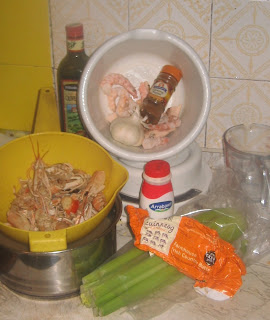 1.Melt the butter in a large saucepan over medium-low heat.
Add the mushrooms, onion, celery, and carrot. Cook and stir until tender, about 10 minutes.
Stir in the shellfish stock, and season with salt and cayenne pepper.
Bring to a boil, then simmer for 10 minutes.

2.Pour the vegetable and broth mixture into the container of a blender,
and add half the crustacean meat.
Cover, and process until smooth.

3. Return to the saucepan, and stir in the cream, white wine, and remaining crustacean meat.
Cook over low heat, stirring frequently until thickened, about 30 minutes. 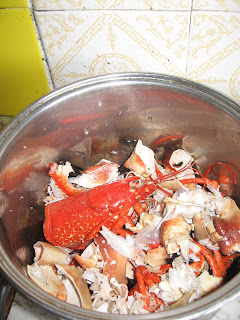 Very simple and straight forward. Take any shellfish remains, crab claws, lobster, prawn etc and break up.
Cover with cold water, add some salt, pepper, bay leaves, a small onion, small carrot and some celery.
Bring to the boil, simmer for an hour and a half. Allow to cool and strain off liquid.
Shells can be put in the ash drawer of a fire, dried out, broken up and spread on garden paths or veg beds to deter snails and slugs as eggshells are.

Posted by irishkitchengarden at 4:04 AM