Asparagus, quite an expensive food in shops is easily available from your garden once it is established. Asparagus is a native to coastal regions, so with a bit of care it should do well here.
It's a perennial crop, so will keep producing year after year.
I decided to grow from crowns as opposed to seeds in order to be more sure of establishing the crop. 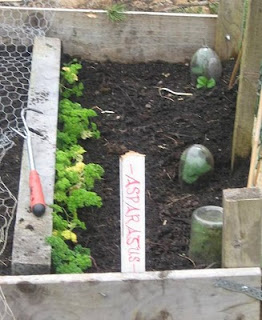 Bed preparation was straight forward, but I put a fair bit of work into it.

As with the Jerusalem Artichoke I dug down to base rock in the bed.
I pulled the stones from the dig and dumped them at the bottom of the trench to create drainage and a base.
After that I heaped in about two whellbarrows of seaweed and another of well rotted manure - this is a permanent bed, so I went to town on it.
As asparagus is a coastal plant, I feel the seaweed will give it the best nutrition and environment as well as deter slugs underground. 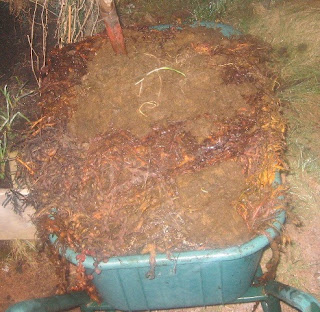 Over that I used chicken wire nailed to the sides of the bed to create a sieve (I think it is referred to as a soil riddle normally) for the soil, breaking it up and removing stones, weeds and lumps of last years turned in grass that had not broken down.
Removing this materiel also let me find cutworms, leather jackets and other nasties that were quickly dispatched to the big weed patch in the sky.

The asparagus patch was separated from the rest of the bed by an old limestone kerb.

The plot itself is lower than the rest of the bed, this is important as the asparagus patch needs to be built up year after year to continue cropping.
It also creates a barrier, obviously the idea is the asparagus spreads its roots around in the plot, expanding and growing within its own soft earth 'box'.

Also, having the different, stepped level I have the option of covering the space with a sheet of transparent corrugated plastic, this will improve the temperature in the plot.

I am growing two types, both purchased from Mr Middletons in Dublin, the idea being variety and different cropping times to extend the production period.

This blog is independent, no sponsors so no vested opinions. In all fairness having previously recommended Mr Middletons postal service I'm afraid I can no longer do so, but more about that later.

One was Connovors Colossal, holder of the RHS award of merit for an outstanding variety and Mr Middleton Gold Medal Winners Bloom 2009/2010. 6 crowns cost €8.99 EUR

The other was Pacific Purple. Advertised as more tender and sweet than many green varieties.
The spears are basically stringless and can be eaten raw, with dips, or sliced in salads.
Colour is lost if cooked so is best steamed. Produces supersweet white spears if earthed up.
4 crowns cost €8.99 EUR 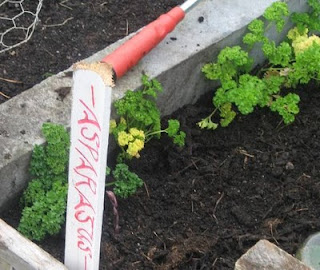 This year I am trying to do as much companion or complimentary planting as possible, every bit helps in the fight against pests and plagues.

Parsley  is a companion to asparagus and tomato because it deters asparagus beetles as well as carrot flies and rose beetles. It is also said to improve growth.
The Parsley plants were last years plants starting to grow again, so I simply transplanted them into the asparagus plot up against the limestone to give it a bit more heat, this I hope will help it establish and flourish .
I may also plant a few Atika - root parsley seeds there when the weather gets a little better.

Because of the parsley as a companion crop and the transparent plastic cover option I think I will also try growing tomatillo in the plot. The seeds are en-route from realseeds.co.uk.

A relative of the tomato these small vegetables in a papery husk are related to the tomato, are very productive and easy to grow, used to make salsas, chutneys and in pasta sauces etc, as well as traditional ingredients for Mexican and South American dishes. Tomatillos, referred to as green tomato (tomate verde) are a staple in Mexican cuisine.
The bed itself is in quite a warm, sheltered spot so as a catch crop I also threw in a few strawberry plants picked up as a compulsive buy at Aldi in Clifden.

Mr Middleton problems.
Having recommended Mr Middletons postal service in the past I'm afraid I can no longer do so.
This year, the delays by Mr.Middletons were a problem, as was the very poor communication. I was very dissappointed by the very, very poor customer service.

I cancelled my postal order and the crowns were purchased by a mate in Dublin for me at Mr Middleton's direct.

The attempt to buy them online dragged out, a lot of hassle with no apologies and little explaination.
On the 11th of January I ordered Jerusalem Artichoke and Asparagus crowns from them, as advertised in the Irish times. It was the first time I had spare cash in some time so it was a real treat.

After ordering, and getting confirmation, I got an email saying that there might be a small delay in deliveries.
Over a week later I emailed asking for an update, again, the reply was that they were awaiting delivery with the Artichoke and I should have them within a week - that was about the 19th of Jan.
Roll on Feb 15th - and a phone call asking for card details. I had assumed that payment had been taken in January - but no, and in the meantime I had changed my card.

So I'm a little fed up being messed about, particularly after having been a loyal customer.
If I could have sourced the asparagus crowns elsewhere I would have, as I did with the Jerusalem Artichoke.
The least they could have done was send on the crowns, and send on the tubers at a later date rather than leave me incommunicado for nearly a month.
Anyway, as the old saying goes - buyer beware, and I am sure there are crowns in local garden centres.

Posted by irishkitchengarden at 7:40 AM