Just watched that new RTE program on Monday - How to Create a garden. Not a patch (pardon the pun) on Garrai Glas that I finally caught up on with their website.
I have to say at least it is a gardening the How to Create a Garden is a gardening show - and fair play to the people who make it, but I found it of little use.
At first I felt was it just me, but the program got pretty badly slated on by others as well on boards.ie as you can read here.
I think it is well meant, but in fairness it is a re-development of a patch of well cultivated land at Fota house that has been cared for over centuries, hardly typical.

I'm fairly sure the average back garden or small holding has not recieved one tenth the attention before being set over for crop's or a kitchen garden.
The use of roundup was disturbing. Why not show people how to make their own weedkiller or support a small Irish company making organic weedkiller like OWK? I feel that RTE should when possible try to promote Irish companies.
Also, there is one piece of advice I always give people when developing a new garden for veg from grass is use supernemo's - again - an Irish company but vital against cutworms and wireworms - in particular when starting a veg garden on virgin grass land like a lawn. If you don't listen to anything else I say, that's the one thing you should heed - I speak from bitter experience.

Garrai Glas seem's a lot more practical and is certainly better made, presented and interesting.

Today I spent most of my time opening up a new area of the garden. Rather than well tilled and maintained land this is what I faced into. 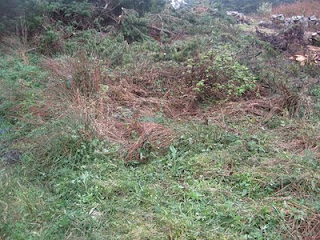 Thats briar, rush, heavy udergrowth, waterlogged and pine boughs. It is this area that will either be used to grow oats or spuds, depending on how things go with seaweed collection, weather ain't great at the moment.

Today it was back to basics, and it was time to get communist in the garden. With all the rock, water and pine trees a strimmer - even if I could afford one - is not really an option, very much back to basics - the heavy curran or sickle. 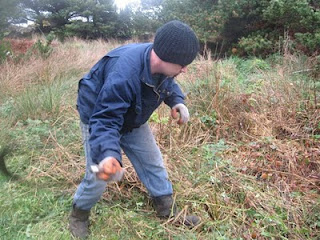 Not the easiest job in the world - but effective. The long briars that I pulled from the undergrowth were big, and impressive. They are also a very hardy plant that produce fruit. Because of the boggy ground, the root stock was reasonably easy to lift. This gave me the idea of using them to my benefit - a coppiced hedge over a drain. 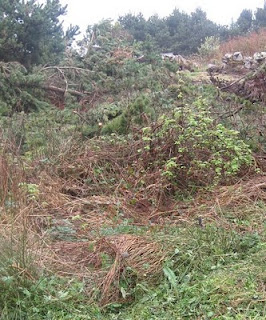 Tomorrow I will need to put in a drain to make this new patch productive.
The drain will serve three purposes.
Firstly, obviously, to provide irrigation.
Secondly, it will be a place to grow watercress.
Thirdly, with the drain and overhang of bush I hope it will attract frogs and toads to eat slugs.
The flowers should also attract bee's and make use of otherwise lost space - that integrates into the overall plan for the garden long term.

Finally, it will provide a boundry to the veg patch, backed by the idea of a fruit producing but prickly hedge.
My plan is to put in a coppiced hedge, made up of fuscia and rosa rugosa cuttings with pine branch off-cuts and laced in the briar's I pulled from the undergrowth.

I am lucky that I live in a place with abundant roadside fruit - but as this recession bites that resource may well come under pressure and there is an increase in interest in home produced and wild food.

I am going to try my hand at coppicing them into a hedge to protect the veg patch and provide blackberries closer at hand. Using the hedge as an extra space to produce food or fruit is - in a way - another form of complimentary or companion cropping

I have the base materiels from what I pulled today to make a start. I have a lot of stripped pine branches, those pulled from the undergrowth or trimmed off have been laid on the raised bed paths, and the needles and small twigs stripped off as part of the anti-slug program.
I also intend to try and incorporate other cane type fruits like rasberries or thorny ones like gooseberry in future.

One thing for sure, before any root crops go down on a virgin grassland patch, the site will need to be dosed with supernemo's - which I anxiously await in the post.

Posted by irishkitchengarden at 6:35 PM