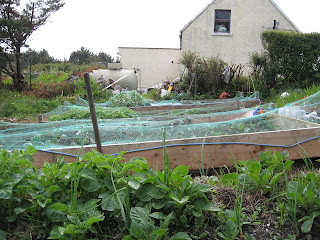 The first step in the process was breaking into a field by the house and clearing gorse, briars, fuscia and a variety of other bush including the hated Japanese knotweed. This was done during the cold snap using saws, slashhook and sickle. 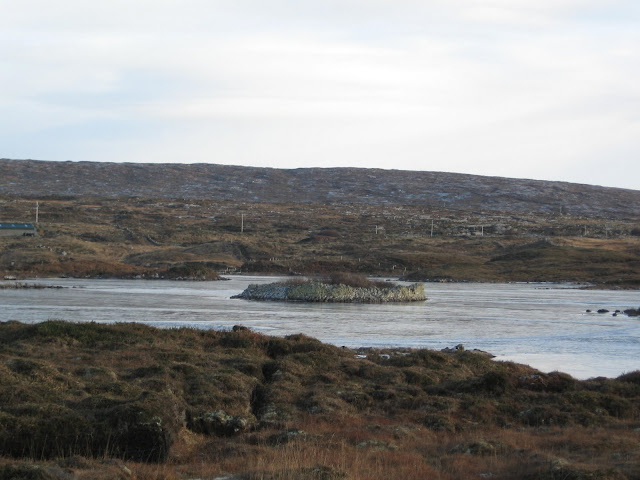 Crannog on lake with ice 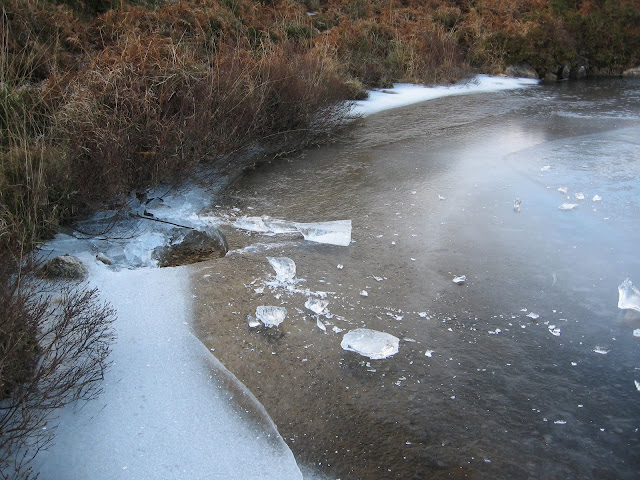 Lake Scannive during the big freeze of January 2010 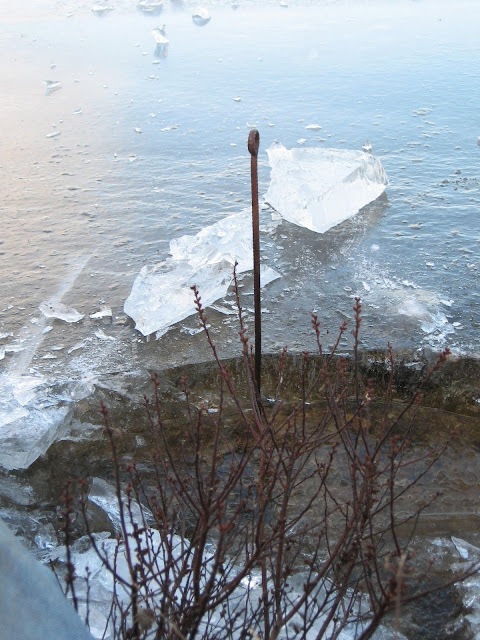 Once the grond was cleared each bed was constructed simply by digging in 9x1 boards and 3x3 (measurements in inches) corner pieces.
Each bed is approx 4 feet wide and approx 15 foot long, but due to rocks it does vary.

I bought the wood from Thomas O Malleys shop in Rosmuc, (091) 574101 from where it was delivered in next day to my door with a smile.

Great little community shop tucked away on the Rosmuc road, they are a local family and a pleasure to do business with. 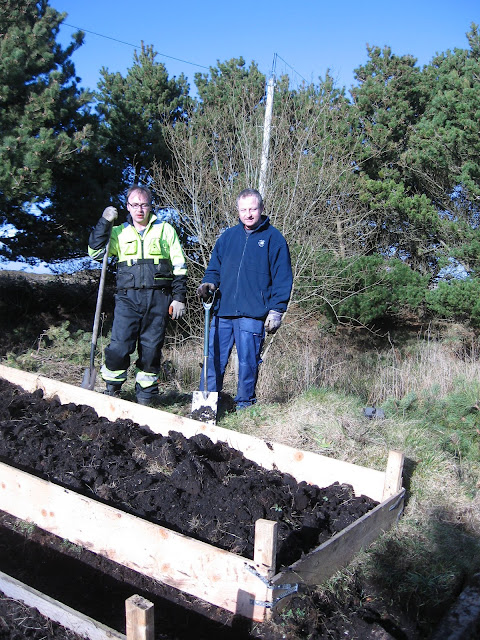 Ollie (right) and I digging in for the winter

When I told them of my plan they even threw in a bag of onion set as a small gift.
Having the free delivery made avoided any problems with transport.

After the boards went in I dug out the bed, down on average to about 2 feet to bed rock.

The main effort was getting the rocks out, sledge hammer and pick axe were the order of the day, just to try and lower the boulders in places.


The base of each box was then lined with seawed and manure, and backfilled after the February thaw.
The pathways are wide enough for me to get the wheelbarrow between them.

The outside the bed, I dug the path ways, putting the soil into the bed, and using the broken rocks to create a base of a path over the ground rock.

Over this, to fill in the spaces, firm it up and to put off snails, as well as clear an area behind the house, old ashes from a household fire that took coal, wood but mostly turf was used as infill.
Over the top of this, to create a dry clean walking and further discourage snails, I collected bags of pine needles from under trees and used these to give the surface to the pathways.

The theory at least is that the pine needles and ashes would create a boundry and discurage snails and slugs.

Because the land here is so poor, and so thin, I figured that the extra soild from the pathways could also help to give indreased depth to the garden.
There were nettles in the area which is a good indication of fertillity I am told, so we will wait and see.

CROP ROTATION PLANNING
The beds were laid out and planned as a long term feature by the house. Most people in Connemara move their veg patch around the farm, giving spots years to recover between plantings.
As I intend to use the area long term, that way of thinking needed to change

Rotation is very important, it stops the soil being exhausted and stops the build up of parasites and viruses that may affect the future health of your crops.

I have prepared four beds, I plan to add a fifth bed next year to allow for the full rotation and a sixth for rhuarb and soft fruits at some stage.
But the four beds I have are laid out roughly in the "People Love Bunches Of Roses" format.
This breaks down your patch into 5 basic groups.

P = Potatoes, they like slightly acidic soil and are one anchor of your crop rotation plan. Tomatoes are also in this group.

L = Legumes, these are basically your peas and beans. These fix nitrogen into the soil and help next years potato crop.

B = Brassicas, cabbage, cauliflower, turnip, suede, brussel sprouts. All green cabbagy things. They like limed soil, which potatos dont like, so these are the other anchor of the plan.

O = Onions, or more correctly Allium types. This is leeks, chives, onions, garlic, shallots and scallions.They like good quantities of well-rotted manure and a bit of lime to increase the alkalinity of the soil, which is why they are followed by brassicas so you are best to give their patch a least one full rotation before potatoes are sown.

R = Roots, things like carrots, radish, parsnips and beetroot. These plants - especially carrots  - prefer soil which is not freshly manured, which in the case of carrots can make them split.

As for salad stuff like lettuce, they will fit in where there is space, which is between leeks at this time.
Also, bed #1 had a big rock, so I sectioned of a part and filled it to a better height with manure and compost for things like squash and cucumber like plants, but that is just an experiment really

Posted by irishkitchengarden at 9:39 AM