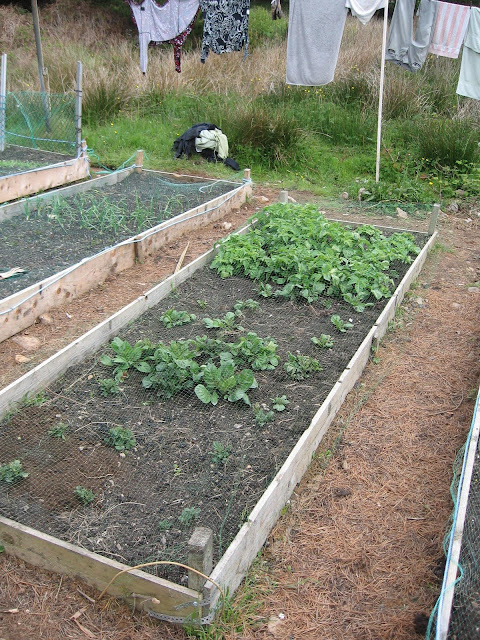 Spuds, 3 varieties.
In the foreground, the smallest plants, are an English heritage variety called Mr Littles Yentholm Gypsy.
I sourced these as eating potatoes from Carrols heritage potatos, and had them sent on via a friend in the UK - many thanks JJ - your a gent.
I am excited about these, they are rare, can have skin colour of 3 different shades, and may well be the only examples in Ireland. hey are, however, said to be susceptable to blight.

I picked up certified seed in Dangan House Garden centre in Newcastle, Galway.
For larger orders wherever you are, or if things are tricky to source see Local organic spud agents fruithillfarm.com Joe Hynes in Galway does Mayo as well - sound bloke.


In the centre of the bed there are Setanta, a new variety in Ireland.
These were chosen as they have been bred to the Irish palet - i.e. flowery with a lot of dry matter, and are meant to be highly blight resistant.

Setanta
The largest plants in the raised bed are Orla, the early variety. Being an early crop, in theory, means they miss the main blight risk period.

Orla
To look at and research other Irish varieties I would suggest a visit to the Irish Potato Marketing website.
Here you can find out more about modern and mainstream Irish varieties. They are among the best in the world at what they do.

Other types that were suggested to me were two new very blight resistant crops from Hungary, Sarpo Mira and Sarpo Axona, but I wanted to stck to Irish types for food miles as much as anything else. 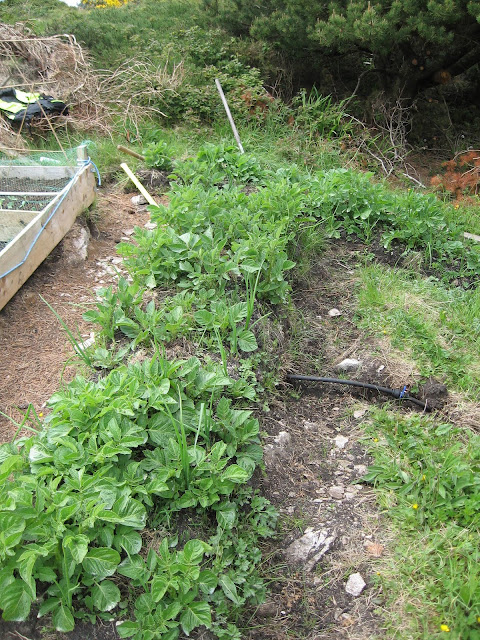 Old fashioned ridge, note rock and how thin soil is

Here we have Kerr Pink. These were uncertified, a friend, Dermot Leavy who owns a local shop in Ardmore was throwing away a few old spuds and I took them off his hands.

The Kerr Pinks were the only type I chitted - and as you can see here in the foreground a few Orlas, mid ground are Setanta, and then Kerr Pinks whaich are doing very well for a main crop, so chitting does work.
They are by far the largest plants even though the further ridge is in shade and North facing.

I put in the ridges in the traditional way using well rotted manure and seaweed.

They went into two ridges as there was simply no space in the bed for them, and Kerr Pinks are a local favorite.

Intercropped on the side of the ridge are excess Stutgarter onion sets that are doing well.

I was worried that I had a touch of blight in early May, and sprayed with coppersulphate, soot and soda, this traditional remedy was given to me by Tommy Paraic Tom Phait Canavan, so many thanks for that.
I found on the internet this remedy is regarded as the most organic way to control blight, and is known as burgandy mix.

It may have been frost damage as opposed to bight, but after spraying a blight warning was issued by met eireann, so prevention is better than cure. 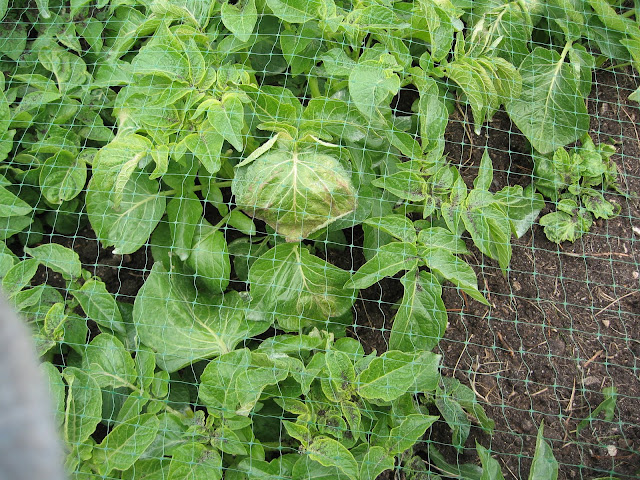 I was a little concerned that the wilt here could be blight, and after getting into a tizzy, it was pointed out to me on the excellent website gardenplansireland.com that it was most likley frost damage, which is a relief.

A few beetroot for which there was no space have been rammed in at the end of the bed, but at the top end I think I will build a frame and plant out Costoluto Fiorentino tomato as an experiment, it is a harsh climate here but they were thrown in the post for free when I placed an order in the UK.
Tey have sprouted, but the package advises not putting them outside until the plants are 10-15 cm tall, so looks like I will have to wait.
I've not known anyone to plant tomato outdoors in Connemara, but the long range forecast is good, and according to gardenplansireland.com they require a growing temp of about 15 deg C, so may as well give it a shot - and if they dont ripen, then its chutney.

Posted by irishkitchengarden at 10:50 AM