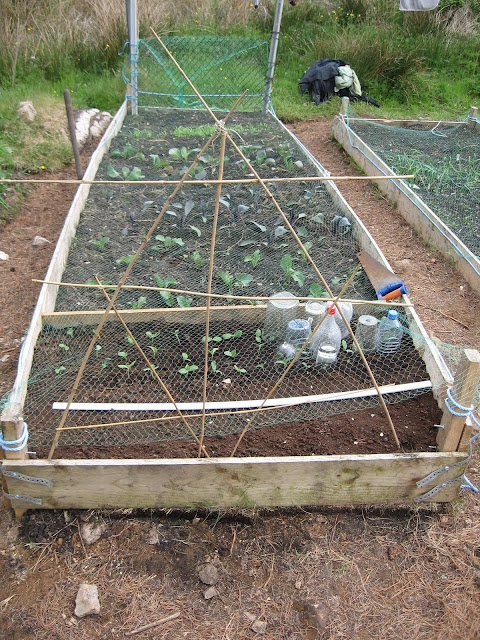 My job has taken me to some fairly far flung places, so when I ordered the seeds I went for stuff that in general would be harder to source in Ireland.

Well, here is bed 1, mostly brassicas. In the bed there are 3 types of cabbage, Greyhound Savoy, a Dutch heritage savoy variety - Bloemendaalse Gele, and a red Rodeo F1

The Bloemendaalse Gele is a nice, mild Dutch variety regarded as a gourmet cabbage that can be used to make Zuurkool, the Dutch version of Sauerkraut, but it is milder than the German type, with Carroway seeds and other flavouings. 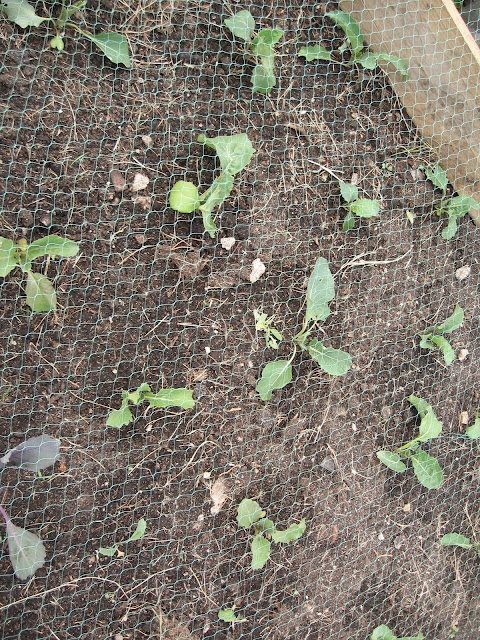 Greyhound is a solid Irish variety, it is the only brassica I did not grow from seed, I picked up some sets in Dangan House nursary centre in Galway. They were planted by Mr Lance Spring on a visit here to the west.

The Rodeo red cabbage is a hybrid - but it had good reports. I planted it with barszcz (Polish Borscht) in mind but I would like at some stage to get a traditional heritage Polish or Ukranian red cabbage, maybe next year.

Also in the bed are a mix of Cauliflower and Broccoli seedlings that have just been planted out and a stripe of Matador Spinach I picked up in Lidl.
The Cauliflower is the All the Year Round  variety, and the Broccoli is an Autumn Ironman F1 hybrid.

The trellis at the end will support runner beans and Acocha/Fat Baby from South America.
Achocha is a gherkin like plant, that when fried tastes like green pepper.

The box in the foreground is a raised section of manure and compost.
In it now are a mix of assorted gourds and Patisson Sunburst squash hybrid, from Lidl.
This box will also be used to grow 'White Volunteer' Cousa Courgette from the The Real Seed Catalogue.
Other crops being sprouted in the window sill as I write are Achocha, exploding Cucumber and a few extra beans and peas.

At the bottom of the bed I also made some space for extra parsnips, just one row of them.

After the Spinach is harvested, that space will be used for Celeriac (Monarch) which I have trayed inside, but grows really, really, really slowly

Soil regulator lime available from most garden centres was added to this bed as Brassicas perfer a more alkeli soil than is normally found in Connemara which is acidic.

Posted by irishkitchengarden at 9:57 AM