There is a real temptation, after doing so much work, to revert to Abbot Arnold Amaury's attitude of "Caedite eos. Novit enim Dominus qui sunt eius" - Kill them All - God knows the innocent.

Everything in nature serves its purpose, everything has evolved to its place and has its reasons. Not all insects and bugs are pests.
Spiders, ladybirds, bees, worms and may beetles help us in the garden. 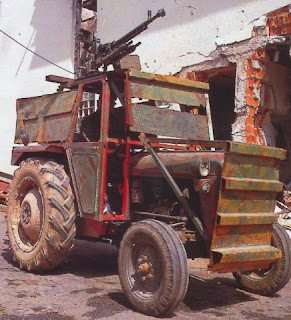 But some, slugs, caterpillars, leatherjackets and others are threats to the veg garden.
I really don't want to use chemicals in the garden, as they will kill helpful or harmless bugs, and can hurt bees and hedgehogs,

I like them and you dont see many hedgehogs out here in the west - not to forget that whatever we spray goes into our food chain.

In actual fact, if the hedgehog hating UK wardens who cull the hedgehogs in Uist in the Outer Hebridies need a place to send them as refugees instead of killing Mrs. Tiggy-winkle and her family every year, they can send them here.
If they can survive Uist, Connemara would be like Hawaii, they are more than welcome as asylum seekers here as they eat slugs and snails so would be an asset.

I also really, really dig bumblebees and dont want to see them harmed - but more about that in another blog.


PESTS EXPECTED
I can't cover all threats, but there are some that I have already identified.
Slugs and snails have a perfect habitat here with mild, damp weather. I do hope the cold winter may have reduced their numbers.
Daddy Longlegs - or Cranefly - until now I thought harmless, quite likeable creatures, but it turns out their kids are utter delinquents in the veg garden. Their larvae are called leatherjackets and do major damage to roots.
Other problem kids are caterpillars, the larvae of butterflies - already I have seen a lot of a white type with orange tipped wings fluttering around my garden. For help on identification of butterflies see irishbutterflies.com and ukbutterflies.co.uk

The three kittens do try, but have not succeeded in catching any and so it seems to be up to me to sort them out.

There are onion fly and carrot fly, but I believe - and I may be wrong here - that they prey on each other so where I have carrots, I have onions in an attempt to divide and conquer.

The only natural allies I seem to have are dragonflies and spiders, so one hopes they will take up residence in the trellis' and catch some of the butterflies, aphids etc.

This is the term I'd use for something that is not active, not aggressive but a deterrent - like the Swiss army.

SLUGS
In an effort to dissuade slugs from getting into the beds, the pathways have been made of old ash, and a surface of pine needles has been built up around the beds.

Coffee grounds are already recommended as a home remedy for keeping slugs and snails at bay.
Each morning I sprinkle coffee grounds around the paths as well as left over coffee.
Coffee grinds apparently repel slugs because pure caffene is a poison to them and corree has a very bitter taste.
I also do not want to use chemical slug pellets as these can be eaten by hedgehogs and birds. Johnstown garden centre offer a bio alternative to chemical slug pellets as do Irish Seed savers with their ferramol pellets

Another avenue I am looking at is the electrical low voltage system - essentially two copper wires hooked up to a battery. When the snail hits both wires they get a tiny shock which drives them back.
Comercial version of this are relativly expensive, and I dound a length of discarded telephone wire, so I am looking at doing something of that nature in a DIY set-up.

There is also the old fashioned slug trap with beer. Two things put me off this.
One is will a beer trap attract slugs from outside the beds.
Secondly, is it immoral to have beer and not actually drink it yourself?

BUTTERFLIES
There are three types of White Butterflies whose larvaes pimary food source are Brassicas - or Crucifers as we should call them in future.

They are: Large White (Pieris brassicae) Small White (Pieris rapae) and Green Veined White (Pieris napi)
They all look quite similar - these pics are all female, and anyone who has seen the Alien movies knows the egg layers are the really dangerous ones.

The good news is that their caterpillars also eat Nasturtium, apparently, planting Nasturtium flowers can distract the buggers.
So I intend to plant some out close to- but away from the cabbage beds. The intention would be to hit the brassicas with liquid derris plus, but not the Nasturtium, causing a distraction at least one would hope.


ACTIVE DEFENCE
Well, this makes me worse than Saddam Hussein I guess, I have the capability and I am perfectly happy to use biological and bio-chemical weapons of mass destruction that are at my disposal.

Active measures I would term a more aggresive form of pest control, going out to kill or maim the pests.

Nematodes are new to me - these are the natural parasites of pests that occur naturally in the wild, but by concentrating them in a small area (e.g. the veg patch) we overwelm garden pests.


I have bought my initial batch of nematodes from Mr Midletons - who are one of the best garden suppliers on the Island, and not to disparage them in any way, it was only after I made the purchase online did I find an Irish made product which I will be buying in about 6 weeks. It seems better for the casual gardener.

From Supernemos you can get, online, SuperNemo, an Irish invention. It is a little more expensive than Nemasys - but it kills a wider range of pests.


What I would really like to see from an Irish company like that is a twin-pack containing nematodes for slugs and all the other nasties, hope someone does something like that.

Nemasys / Nemaslug
Biological Warfare - These are parasites that hunt and kill garden pests. I bought them online from Mr Middletons in Dublin

Nemaslug is aimed at slugs and snails and like Nemasys uses natural parasites in large numbers who hunt and kill slugs.

These products are living organisms, and have a very short shelf life. They must be stored in a fridge, and made up solution cannot be stored.

I got both types as I wanted a comprehensive program.

But I will try the Irish SuperNemo next time I am due to dose the beds.

From Mr Middleton you can also buy full season programs for each type, which means they post you new nematodes about every 6 weeks - more details on their site.
The main thing about the application of nematodes seems to be never in direct sunlight - i.e. overcast days or evenings, into moist but not waterlogged soil - ensure temp over 10 degs C and thats it, just add the sachet contents to a watering can and spread it around.

This product is dangerous for aquatic life, so if you have a pond cover it up. My only concern in using this is that the old drains nearby are a nice home for frogs (who eat slugs and bugs) so I only sprayed on days that had a few dry days with little or no wind forecast to avoid as much runoff and drift as possible.

Only the beds were sprayed, not the extra ridges as they are very close to the old drains.

Posted by irishkitchengarden at 7:17 AM